Higher Base Salary Vs. Bonus: Which Is Better And Why? 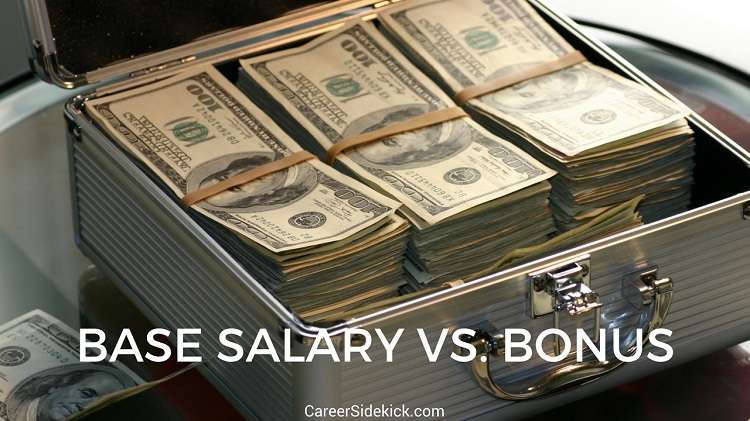 There are many opportunities to negotiate a new salary structure. You get a chance to do this every time you change companies, and also when you change roles within your company or decide to ask for a promotion or raise at work.

So what should you focus on… higher base salary or bonus?

I’m going to walk you through the base salary vs. bonus debate so that you’ll know what to target next time you negotiate.

We’ll also answer the question of “What is a good bonus percentage?” so you can make sure you’re getting a great bonus if you do receive one.

Higher Base Salary Vs. Bonus – Which Is Better?

In almost all cases, your base salary is more important to negotiate for than other types of compensation in terms of long term importance and value. If in doubt, always negotiate for an increase in base salary above all else.

1. Bonuses Are Usually Calculated as a Percentage of Your Base Salary

This means that having a higher base salary will also improve your bonuses in most companies. This doesn’t work in reverse, though; negotiating for a higher bonus does nothing for your base salary now or in the future.

We’ll talk more about the future soon… because when we look at your future earnings potential, we’re going to uncover a couple of even more compelling reasons to go after base salary first when deciding between base salary vs. bonuses.

2. Base Salary Implies Seniority and Higher Value to Future Employers

It depends on company size, industry, and more.

Because of how much job titles vary, recruiters and hiring managers often use base salary to determine your true level/seniority.

As a recruiter, I’ve seen job seekers miss out on an interview because they were deemed too junior for a position due to their current base salary. (We asked for their current compensation in the initial phone call and passed the information to the hiring manager). It’s a shame that good, talented people were judged based on this, but it happened…

…Their resume was fine. Their amount of experience was fine. But the hiring team still felt the candidate must be lacking something if they’re only making $XX,XXX at their current company.

Now, some states in the US have recently made it illegal to ask for your salary history, but many have not.

And here’s something important to consider: If you’ve negotiated for high base salaries throughout your career, it’s going to be to YOUR advantage to reveal this. It becomes a negotiation tool or piece of leverage when asking that next employer for a high salary… rather than something you’re worried about hiding.

You can use it to command higher pay in your future roles.

The bottom line is: When you talk to a new company, instead of the hiring manager spending hours trying to figure out the intricate details and differences between your current compensation package and his/her company’s compensation package, they’ll just look at A) your base salary if they can, and B) your total compensation.

So the quickest way to imply a high value to future employers is to have a high base salary in your recent roles.

3. Bonuses are Less Likely to Carry Over into Future Job Offers

While companies will have a general salary range that they’ve budgeted for a given role, there’s typically some flexibility.

They can bend the rules a bit or make an increase in base salary to accommodate an excellent candidate.

However, as a recruiter, I’ve seen many companies be much stricter on cash bonuses. It’s not uncommon for a company to tell a candidate, “Sorry, every employee in this group gets a 10% cash bonus once per year. We can’t change that for you.”

Whereas, a base salary is more likely to carry over; you’ll be able to continue building that throughout your career and negotiate to make sure you’re always taking a step forward in base salary.

And remember – as mentioned earlier, your base salary DOES impact your bonus in most companies. The typical company offers annual cash bonuses as a percentage of your base salary.

Let’s imagine your cash bonus is set at 10%, and cannot be changed.

But what if you negotiated your base salary up to $115,000? (While doing nothing to your cash bonus).

All of a sudden, that same 10% bonus is $11,500. You put $1,500 more into your pocket as a bonus while also earning that higher base salary. That’s why negotiating for base salary first is a win-win and what I recommend.

What is a Good Bonus Percentage?

A good bonus percentage for an office position is 10-20% of the base salary. Some Manager and Executive positions may offer a higher cash bonus, however this is less common. Some employers will not offer a cash bonus, and will offer a higher salary or other compensation – like stock options – instead.

Companies are often somewhat strict and inflexible with these bonuses (it’s not uncommon to see an entire group receiving the same bonus percentage, for example, as per company policy).

So don’t get discouraged if the employer won’t budge or allow you to negotiate your bonus percentage; just focus on your base pay instead, as mentioned earlier in the article.

Also, in some cases, employers will offer other bonuses that aren’t connected to your base pay – for example, they may offer profit sharing where you receive a very small percentage of company profits (which can still come out to be quite a bit of money).

Base Salary Vs. Bonus Conclusion:

If you negotiate for base salary, you can continue to build on this in every new job offer… continuing to go upward. And as mentioned above, this will also increase your bonus indirectly, as long as your bonus is a percentage of base salary.

However, if you focus on negotiating for bonuses, you’re running the risk that all the hard work negotiating for a better bonus at your current company might not translate into anything in future jobs. They often have a standard bonus, and that’s what you get.

You can find incremental increases to your base salary throughout your career, in every job change.

That’s what to build!

You aren’t going to be able to do that for a cash bonus. You can’t usually go to a company and say, “well, right now my bonus is 20%, so I was hoping to get to at least 27% in this job change.” That’s just not how it works, you’ll soon have an absurdly high cash bonus that no company will match.

So that’s why I recommend you negotiate for base salary first and use bonuses and other benefits as a secondary piece to go after once you’re satisfied with base salary, or once you’ve come to a stalemate  in the base salary discussion.

Get everything you can in base salary, and then negotiate other pieces like stock options, cash bonus, vacation time, etc. Think of those as a secondary objective, but don’t ever give up base salary if you can help it.