Why Do Recruiters Lie? (And 8 Lies They’ll Tell You) 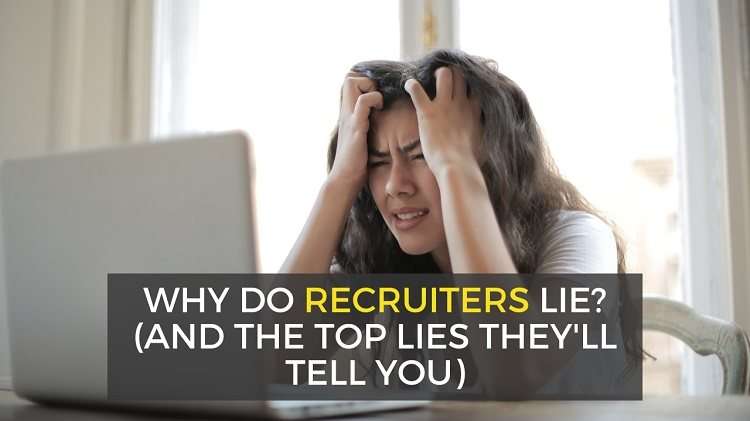 If you’ve worked with job recruiters in the past, it’s likely that you’ve had at least one bad experience.

While some recruiters are great, others are not very good and will even lie to candidates at times.

In this article, I’m going to reveal:

Why Do Recruiters Lie?

Job recruiters lie for a couple of reasons. Most agency recruiters are paid when you accept a job at a company they’re recruiting for, so they’re rewarded for convincing you to accept that job, and they’re not compensated if you accept a job elsewhere. This can lead to some of the lies recruiters tell (and I’ll share eight of these lies coming up next).

Also, some recruiters lie to avoid uncomfortable or difficult conversations with job candidates. I’ll share a couple of examples of these recruiter lies in the next section, too.

Finally, at times, a recruiter may lie to gather more resumes and have more conversations with candidates, even if they don’t have a suitable job for you at the moment. Toward the end of this article, I’ll share an example of this happening to me, and how you can avoid being tricked.

1. “There’s no salary range for the position”

If you’re ever discussing your salary requirements and ask a recruiter what a position pays, you may hear them tell you that the hiring manager hasn’t decided, or there’s no salary set for the role yet.

This is one of the most common recruiter lies, and they’ll tell you this to try to refocus the conversation on your salary. They’re trying to get you to share past salaries and what type of salary you’d accept in a future role.

The fact is, if a job has been posted by a company, it’s almost certain that they’ve set some type of salary range for the role. Employers don’t just post jobs without any consideration for what they’re budgeting and what they’re hoping to pay someone for the role.

Plus, in most cases, other people are doing the exact same role in the company already. If you’re interviewing at a large company, it’s unlikely that you’re the first person to hold a certain job title with them.

So it’s typically a lie when recruiters tell candidates that the employer has no idea what salary they hope to pay for a role.

2. “I need to check references before submitting your resume to any jobs”

This is often a lie but not always. I’ll explain below.

Some recruiters will tell the candidate to provide references upfront, before they can help you in your job search.

The right time to provide job references is near the end of the interview process when an employer wants to offer you the position.

Recruiters sometimes ask much sooner in order to build their network. They’ll talk to your two or three references, ask a few basic questions about your past work, but then try to build relationships with those people in hopes of helping them get a job in the future, too.

So I recommend telling recruiters that you have references ready, but you like to hold off on having people call your references until you know an employer is interested in making an offer.

There’s one exception, though: If you were fired or have some other specific scenario in your recent work history that might be cause for concern, then the recruiter may be telling the truth when they say they need to speak to a reference or two.

They want to know what to expect in terms of your conversation with the employer and what will show up in background checks, and so they want to be certain that they’re clear on what happened in your last role if you were fired, etc.

When a recruiter submits your resume to an employer, they’re vouching for you and sticking their neck out for you to some extent. They only want to do this if they understand your background and think you have a reasonable shot to get the job.

So recruiters are afraid of submitting your resume to a company if there are big unknowns/questions about your background and employment history. That’s why they may ask for a reference upfront and call that person before they can submit you to a hiring manager.

3. “I always have your best interests in mind”

Recruiters are paid by the employers who they help to find job candidates. A job seeker never pays a recruiter. That should give you a clear indication of who they truly work for.

The best recruiters still balance the needs of the employers they work with and the job seekers they represent, too.

It would be truthful for them to say, “I work for the employer because that is who pays me, but I try my best to balance the needs of the candidate, too, and I treat both sides fairly. My goal is to get a good outcome for you and the employers that I work with.”

They can treat both sides fairly, and many do. However, their main loyalty will always be with the hiring manager and company, not the job candidate.

So if a recruiter says that they’re putting your best interests and priorities above all else, and will always do so, it’s a red flag and one of the more common recruiter lies that you’ll hear.

Be wary of a recruiter who tells you that they’re not worried at all about pleasing the employer or hiring manager and that they only work for you, because it’s simply not true. You’re not paying them anything, so how are they working for you?

This is something that I’ve heard many recruiters tell a candidate, and while the good headhunters will try their best to give good, solid job search advice and guide you toward what’s best for you, there is the potential for a big conflict of interest, which can lead to lies.

For example, imagine you’re working with a recruiting agency, and you’re considering one job through their firm, plus one that you found on your own.

With the first job, they’ll earn a large contingency fee — sometimes tens of thousands of dollars — from the employer if you’re hired. That’s how recruiters are paid.

Whereas, if you take the job that you found on your own, they’ll make nothing.

So you can see where there’s some conflict of interest and some temptation for a recruiter to guide a candidate toward the employer that’s going to pay them a big fee if you’re hired.

Not every recruiter lies about this, but it’s an issue to be aware of. You need to look out for your career and your best interests because nobody is going to care as much about your career as you will.

5. “I’ll keep your resume on file and let you know if I find anything”

Practically every candidate who has talked to recruiters has heard this at some point. The truth is: If a recruiter doesn’t have an appropriate position for a candidate right away, they’re likely to forget you within a few weeks.

Unless your skill set is exceptional or highly sought-after, they’re not going to remember to look for you in six months. They may have hundreds of resumes stored, or more, for some types of jobs/backgrounds.

Unfortunately, this leads to lying.

For example, if your skill set and resume just aren’t too attractive or relevant to the jobs they recruit for, some recruiters will end a conversation with you by saying, “I’ll keep your resume on file and keep you in mind.”

It’s impossible to know whether a recruiter is interested immediately after talking, but if you haven’t heard from them two to three weeks after the initial discussion, it’s unlikely that they are going to get back to you. You can still follow up once to check if they have anything, but after that, it’s best to move on.

Unfortunately, some recruiters will also lie to candidates about the job duties and what a typical day at work will look like.

Candidates should always ask the hiring manager, “What are the main tasks I’d be performing, and how would a typical day and week in this role be structured?”

If you don’t ask, it’s possible you’ll get the job and discover that the tasks and typical day look nothing like what the recruiter told you.

For example, if a recruiter senses that a candidate is hesitant to work in sales, they may lie and say that a job only involves approximately 30% selling and 70% other tasks.

After starting the job, candidates may discover that selling makes up more than 50% of the typical day.

So ask questions in your interview and if in doubt about something, get it in writing!

While not technically a lie, recruiters may also leave out important information. For example, maybe the job is open because this hiring manager is difficult to work with.

A recruiter is unlikely to tell you this if they fear it’ll stop you from accepting the job.

So to protect yourself, read employee reviews on sites like Glassdoor and be careful not to accept a job from a company that has too many negative reviews.

You can’t always rely on a recruiter to give you honest feedback about the quality of an employer and whether you’re likely to have a negative experience.

8. The worst lie of all: Fake job postings

Unfortunately, recruiters will sometimes post a job online that doesn’t exist so that they can talk to more talent and collect more resumes.

This happened to me in Boston before I became a recruiter myself.

I replied to a job ad and then received a request from a recruiter to come to their office to discuss a contract role that paid $20 per hour.

When I arrived, they asked me a number of questions, we discussed my resume, but they never said a word about the $20 per hour job. They had totally forgotten about it because it didn’t exist.

When I asked about the job at the end of our conversation, I could see the panic in the recruiter’s eyes because they had forgotten that they had used a fake job to get me to come in.

They tried to pitch me on other roles, that of course paid less, but they didn’t have this job I had wanted.

So, when a recruiter contacts you about a job, ask many questions to verify that the job is 100% real before investing time into meeting with the recruiter. Then, a day before your appointment, contact them again to confirm that the job is available.

If you remain alert and aware of the common lies above, you’ll be able to get the most out of your interactions with recruiters and find a job faster, while protecting yourself.

Recruiters can be helpful to certain types of candidates, but it’s important to understand how they work, how they’re paid, and where their true motivations and loyalties lie.

How Many Jobs Should I Apply For?