How Long to Hear Back After an Interview? 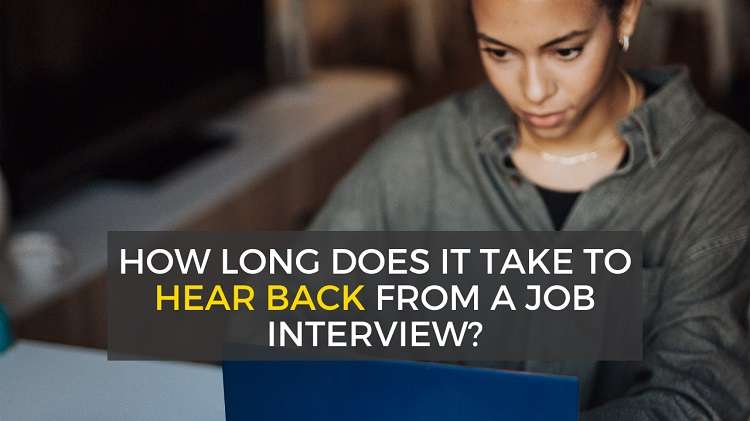 If you’re wondering how long it takes to hear back from a job interview, then keep reading.

The good news is this: Most of the reasons for a delay *don’t* mean you did something wrong or that you’re out of the running for the job.

So take a deep breath, and we’ll go through the likely reasons you haven’t heard feedback from an interview yet, and how long you may need to wait.

How Long After an Interview to Hear Back: Average Times

It typically takes 3 to 10 business days to hear back from a job interview but varies depending on the type of interview. Employers will often provide feedback faster after a phone interview and may require more time after an in-person interview.

No matter what stage of the hiring process you’re at, you should conclude each interview by asking when you can expect to hear feedback. That way, you’ll be able to plan accordingly and avoid anxiety while waiting to hear back after the interview.

Then, if that timeframe passes and you haven’t heard from the hiring manager, you can send a follow-up email to ask for updates.

In general, it’s a good idea to follow up once or twice if you’ve gone more than one week without hearing back after an interview (unless the employer specifically told you that it will take longer to hear back from them).

This is much better than the waiting game of sitting by the phone anxiously, wondering if you will get the job. It’s better to take initiative.

How Long to Hear Back After a Phone Interview

How Long to Hear Back From a Second or Third Interview

It can take one to two weeks to hear back after an in-person interview, especially if you’re nearing the offer stage. After your in-person job interview, the hiring manager often needs to meet with multiple team members to discuss your candidacy. They’ll also need to communicate with human resources and other departments before offering you a job.

There are exceptions, of course, and in a small company that’s highly interested in making an offer, you could hear positive news within two to three days.

No matter what size of company you’re targeting in your job search, or how long they’re taking to get back to you, the best thing you can do while waiting for this part of the hiring process is to keep applying to positions.

While it’s tempting to get your hopes up on hearing back after each interview, this is risky and will leave you with no other options if the employer doesn’t make you an offer.

No matter what they said in the interview to indicate they like you, the only surefire way to know the job is yours is to wait until you’re given a job offer.

However, you can read other common signs you got the job here.

Why Does it Take a Long Time to Hear Back After an Interview?

There are many potential reasons why it takes so long to hear back after the job interview. Hiring managers go on vacation, team members needed for the hiring decision go on vacation or become busy with other obligations, and sometimes the entire team, department, or company will need to shift their focus to other priorities or even emergencies (like losing their biggest client, moving offices, etc.)

So don’t panic if you’ve been waiting a few days and haven’t heard any news from the employer.

People in the company need to find time to meet, compare notes and discuss your interview after you’ve left. Even if just one person met with you, they’ll probably share their thoughts with their team, their boss, HR, etc.

And they need to compare you against the other candidates they’re considering. So it always takes some time to do that too.

Now that you know the typical wait time after an interview, here are a few factors that can make it take longer than usual to hear feedback from the interviewer…

Let’s address the most obvious reason a candidate has to wait a long time for feedback first. There’s a chance the company isn’t interested, and they don’t have the decency to let you know promptly (not cool, I know!)

But like I mentioned earlier, there are a whole lot of reasons that DON’T mean you’re out of the running for the job. So keep that in mind, and let’s look at other reasons it takes a long time to hear back after an interview.

Here are the other possible reasons:

1. The Hiring Manager is Still Interviewing Other Candidates

You might have been the first person they spoke to, and they’ve scheduled five others. It’s not fun, but it happens. And it means you’ll have to wait a couple of weeks to hear back after the interview most likely.

This is why I recommend asking about the time frame and next steps after your interview. (“When can I expect to hear feedback? And what will the next steps look like in the process?”)

It’s one of the best questions to ask the interviewer because it’ll remove a lot of stress and anxiety after the interview. If you know they have to speak to five other people, you’re not going to be sitting by the phone the next day wondering why they haven’t called you yet.

2. A Key Decision-Maker in the Company is Out of the Office or Busy

Hiring is a complicated process and often requires a lot of people to give their input, speak with you, or at least sign off on the process and say “okay, go ahead and make this person a job offer.”

And if just one of these people is out of the office or on vacation, it can slow the whole process down and result in it taking longer to hear back from an interview. This is one of the reasons I say summer is not one of the best times to look for a job… because a lot more people go on vacation.

3. A Higher Priority or Urgent Matter is Occupying the Company’s or Team’s Attention

But remember it’s probably not the top priority for them. It’s just one piece of their duties.

So they will have no problem delaying a decision, postponing an interview, or putting a job opening on hold for weeks or even months if the group has too much going on! Even if they already started the process with you.

They can’t always predict what will come up in terms of work and deadlines, so that’s why this happens.

4. The Job Opening Was Put on Hold

Sometimes companies decide they don’t need to hire someone right now, or they’re too busy to do it (for reasons mentioned in #3 above).

So they put the position on hold indefinitely. It doesn’t mean they didn’t like you, it just means they can’t hire anyone right now.

Sometimes budgets get cut too which can derail a hiring process and stop everything.

Also, employers may open another more crucial position. For example, sometimes when a company needs a new manager so they decide to hire that manager first, and then let the manager hire other team members or continue the interview process with other team members.

5. The Company Forgot to Follow Up or Lost Track of Your Information/Status in the Interview Process

This is another good reason to follow up instead of assuming they’re not interested. Sometimes things get lost in the shuffle or the interviewer simply made a mistake.

The greatest risk of this happening is when you initially submit your resume, but it can happen after the interview too. Maybe there’s a new HR person who lost track of needing to schedule the next steps with you. Maybe the hiring manager thought he sent you an email with feedback but never actually sent it.

Any number of things could have happened for you to “fall through the cracks” and not hear back after an interview. Following up is the simple way to make sure it did *not* happen. Here’s how…

Conclusion (And What to Do Next)

You now know how long after an interview you’ll hear back, and what to do while waiting.

Keep in mind that the numbers above are averages, and different employers will have slightly different timeframes.

In fact, even different hiring managers/interviewers in the same company may take different amounts of time to get back to candidates about a position.

Also, the amount of time you’ll wait to hear feedback depends on the number of people they’ve interviewed. So it can vary depending on whether you were referred for a position that’s not posted yet (in which case you might hear back right away) or whether you applied for a job that was posted online, and are competing with 20 other candidates that are also a good fit.

So use the resources and timelines above as a general guideline, but remember that each specific case will vary.

In all cases, you should continue to apply for positions while waiting for a response.

The longer it takes to hear back after an interview, the less likely it is that you’ll be receiving good news.

That’s been my experience after years of working as a job recruiter.

So while it’s always possible you’ll receive the job offer after waiting a few weeks, you should really keep applying for more jobs and lining up more interviews.

You can’t change the fact that it often takes a long time to hear back after an interview, but you can control how many jobs you apply for.

Focus on what you can control and go out and get more interviews while waiting! That’s how to get a job offer in less time!

How Many References Should You Have?

How to Tell a Company You Have Another Offer

When Do Employers Check References?