How to Ask for a Raise (Email and In-Person Scripts) 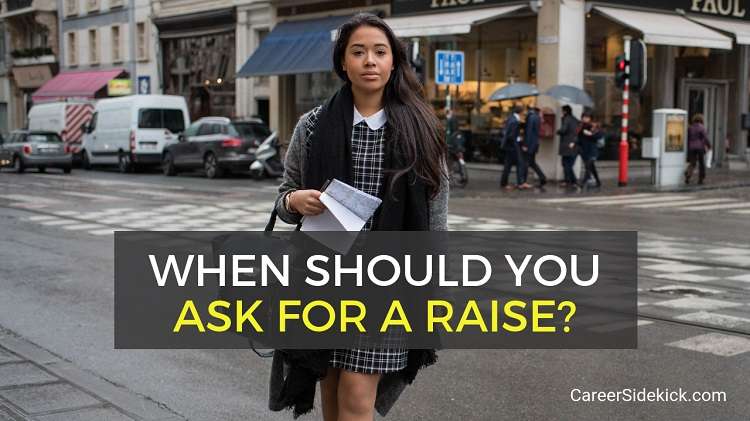 In this article, we’re going to cover how to ask for a raise when you are underpaid (or when you just want a higher salary), with examples and sample scripts you can follow.

We’ll also look at when to ask, because that’s equally important. (While there’s no exact best time to ask for a raise, there are some very important “Rules” you should follow before you go ask).

How to Ask for a Raise: Script and Steps to Follow

1. Set up a time to ask for your pay raise

Asking for a pay increase is an important discussion and deserves its own meeting. So rule #1 is don’t try to bring up the discussion at the end of another meeting, a weekly check-in, etc.

To schedule a time to bring up your request for a higher salary, I recommend sending an email or going to your boss face-to-face. Either way, the message is similar.

Example of what to say when setting up a meeting to ask for a raise:

Do you have 15-20 minutes available today to talk in private? There’s something I’d like to discuss with you. “

If you decide to stop by your manager’s office and tell them in-person that you’d like to discuss something, just make sure you’re prepared with how you plan to ask for the increase in pay… because there’s a small chance they’ll just say, “I’m free right now, actually. Why don’t you step into my office and we can talk?”

This is why I prefer sending an email to begin the process of asking your boss for a higher salary.

2. Your opening line when asking for a raise

Once the meeting starts, your opening line is important. You want to seem calm, confident, and relaxed. And you NEVER want to sound apologetic, so don’t say something like, “Sorry for taking your time.

Here’s a script you can follow when beginning the conversation:

“Hi Amy. Thanks for meeting with me. Things have been going really well and I’m excited about my role here. There’s one thing I wanted to discuss, though.”

That’s a good opener to lead directly into the discussion of your salary or hourly pay, and the raise that you hope to achieve.

3. Make it clear that you’re asking for a higher salary

Once the meeting begins and you’ve delivered your opening line, it’s time to tell them you were hoping to discuss a potential increase in pay. Don’t beat around the bush or leave them guessing.

Example script: What to say when asking for a raise:

“I’d like to discuss my compensation. Based on ___ and ___ (reasons), I thought it was a good time to ask for an increase in base compensation. The amount I was hoping for is ___.”

Note that you can also ask an open-ended question when you ask for more money, instead of asking for a specific number. Here’s a sample of how that would sound:

“I’d like to discuss my compensation. Based on ___ and ___, I thought it was a good time to ask for an increase in base compensation. What are your thoughts on this?”

4. Back your request up with facts and data

You always want to provide real, business-related reasons why you deserve higher pay. (And not personal reasons like, “my commute is long” or “I have a lot of student loans to pay off.”)

So after telling your manager why you wanted to meet and what you want, it’s best to provide some logical arguments.

Reasons you can use when asking for a pay increase:

5. How much to ask for (hourly or salary)

A raise of 10-20% is considered reasonable both for hourly and salary employees. This is the top end of what you should ask for. (And the truth is, you’re more likely to get a 20% increase when changing jobs completely. Employers often give current employees lower amounts when it comes to pay increases. But 20% is the top end of what I’d recommend asking for).

You don’t want to aim too low when asking for your increased salary, because if they counter-offer, you won’t be left with much of an increase at all.

So keep that in mind when deciding how much to ask for in your raise.

6. Always sound excited about your job

While asking for more money, you also want to show gratitude and appreciation for the job. You never want to make threats or sound unhappy.

Tell them you’re excited about how the role’s going, how much you’re learning, etc., and then simply make a logical argument for why you feel you’re worth more and deserve more than your current pay structure.

7. It’s better to ask in-person than in writing

A lot of people come to me asking for a letter sample or script to ask for a raise in writing.

I don’t recommend doing this, even though it’s tempting because it’s lower stress. Most employers and most managers will respect you more and give you a higher increase in pay if you meet with them in-person.

You’ll also be able to gauge their reaction. For example, maybe you ask for 20% and you see them become anxious immediately. They might say, “You’re a great worker and I love having you here, but I just don’t have the budget for that.” You could say, “I understand. I enjoy being here, too! How much could you do?”

That’s an example script of how this could play out well in-person. You couldn’t gauge their reaction or have that good, back-and-forth discussion if you asked for a raise in a letter.

However, if you still prefer to ask for a salary increase for an email, here’s a sample template you can use:

How to Ask Your Boss for a Raise in Writing: Email Script

Is there any flexibility in the budget to provide an increase?

Thanks for your time,

While I still recommend having this conversation in-person and only using email to set up a time to meet, the script above will work as an effective salary increase email to your boss if you prefer to do everything in writing.

You can also ask for a specific amount to be added to your salary, however, I prefer asking an open-ended question like the script above (“Is there any flexibility in the budget to provide an increase?”)

This puts the pressure on them to come up with their best possible offer.

So that’s how to ask for a raise in writing.

When to Ask for a Raise

The best time to ask for a raise is when your work has been going well, your boss is in a good mood, and you’ve been in your current position for at least six months with good performance (and a good performance review or annual review if applicable).

All of those factors will boost your chances of hearing “yes.”

Let’s look at these factors individually below so you can figure out whether it’s a good time for YOU to ask.

Also, I’ll reveal one more “hidden” timing factor that could work to your advantage in certain types of jobs.

First, you always want to ask when you’ve been performing well in your job (and when you’ve been in your current job for a while. Don’t ask for a higher salary when you’re new in a role and still learning!)

I brought up this topic on LinkedIn and some people in my network gave great responses in terms of the best time to ask: 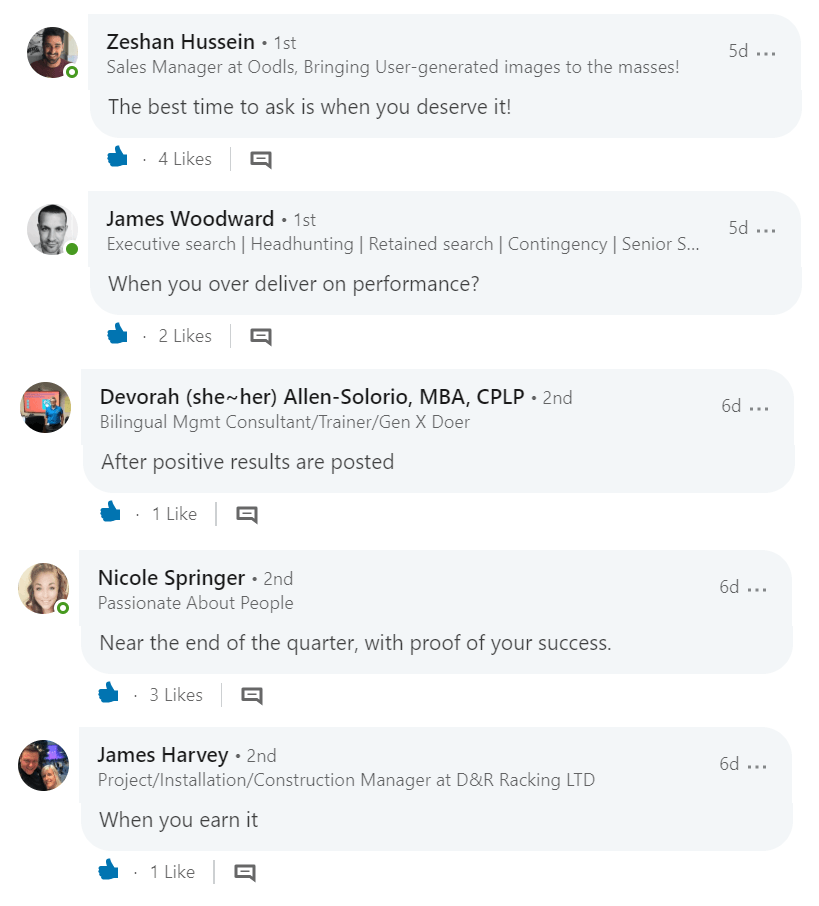 So look at your 1-2 most recent performance reviews, and last annual review when deciding whether it’s time to ask. Your chances of hearing “yes” will be much better if you’ve been producing great work for the company.

The more you’re helping them, the more they’ll be willing to pay you!

Your Manager or Boss’ Mood

It’s better to ask when your boss is calm, relaxed, and in a good mood. So after thinking about how your own work has been going, think about your boss’s own situation. While you can’t always know whether they’re relaxed or stressed, you can observe them and gain clues.

Pay attention to this, and if your boss seems particularly stressed or busy, consider waiting a week or two to ask for a meeting.

Your Tenure in Position & and Time Since Last Pay Increase

You ideally want to have been in your current role for at least 6-12 months.

And it’s best if you haven’t received (or asked for) a raise in the prior 6-12 months, too. If you just received a bump in pay a few months ago, you should wait for 6-12 months and plan on asking for a bigger increase next time so that you’re satisfied.

Your Employer’s Reliance on You

Here’s what one of my colleagues on LinkedIn said about timing your ask, and it’s an interesting point:

So this is one more factor you can use to your advantage. However – you should never give a threat or ultimatum (or imply one). That’s not what is being suggested here.

If you ask as a threat or ultimatum, you may get more pay in the short-term but you’ll damage your relationship with your boss in the long-term and maybe even set yourself up to get replaced after the project is done. So don’t threaten when asking!

As mentioned in our article about the best times of year to apply to a new job, January and February are when key staff return to the office after the holidays and when companies get their new budgets, so it’s definitely a good time to ask for a raise, too.

However, the time of year isn’t as important when asking for a raise. One of my colleagues on LinkedIn said it best:

The bottom line is – you shouldn’t wait weeks or months to ask if the other factors above look good.

The best time of day to ask for a raise is 10:00 AM to 3:00 PM. You should not ask for your salary increase before your boss has had a chance to get settled in the morning and catch up on emails, and it’s best to avoid asking at the very end of the day, too.

As long as you pick a time toward the middle of the day, you’ll be fine.

Beyond this, there isn’t one hour that’s best – it really depends on what’s going to make YOU feel confident and relaxed, since that’s a big factor in how the conversation plays out.

If you prefer to get it out of the way in the morning, that’s a great option. If you prefer to wait until the afternoon so that there are only a few hours left after you ask, that’s perfectly fine, too.

If you follow the tips and scripts/examples above, you’ll give yourself the best possible chance of getting a pay increase, whether you’re underpaid in your job, have had a recent increase in workload, or simply think you could be earning more!