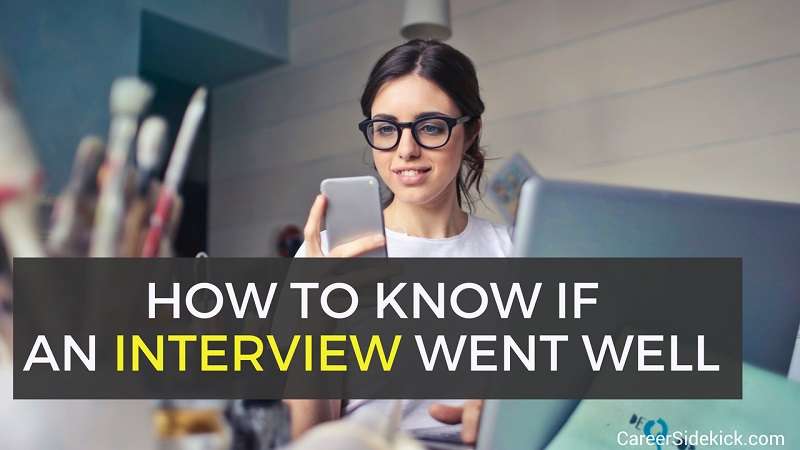 If you didn’t notice any or many of these signs, then it’s likely that your interview went well!

How To Tell If Your Job Interview Went Badly – 14 Signs

1. It was much shorter than expected

Unless an emergency came up and the company explained this, it’s usually a very bad sign if the interviewer is shorter than the scheduled time period.

Sometimes initial phone interviews or video interviews are brief, but at minimum, I’d expect them to last for 20-25 minutes. If it ended abruptly or only went for 10 minutes, it’s a sign your interview went poorly.

2. You met with fewer people than expected

Sometimes if an interview is going very badly, the first person you meet will decide to send you home and save everyone else’s time.

This is an extreme scenario but it does happen, and it’s one of the biggest signs that your interview did not go well.

However… before you freak out….

It really depends on how many people you missed out on meeting, and how well they explained it.

Being scheduled to meet 5 people and then only meeting 4 isn’t a big deal. Especially if they give you a reason (like the person being sick, traveling, or tied up in another meeting).

3. They didn’t share much information about the company or position

Usually if an interview is going well, they’ll try to sell you on the company and position. They want to attract you, just like you’re trying to sell yourself to them.

So if they do very little to tell you about the position or what you’d be doing in the role, it’s a sign that either:

A: The interviewer is inexperienced, not very good, nervous, etc.

B: Your interview went badly

So judge this based on who you spoke with. If it’s some HR intern or assistant, don’t worry about it. But if you met face-to-face with the head of the department and they shared nothing about what the organization is doing or what you’d do in this role, it’s a bad sign.

4. They didn’t make much effort to “sell” you on the company

Same as above. Sharing information about the company and selling you on the company go hand-in-hand. They share information with the goal of getting you excited about what you’d be working on and the opportunities you’d have if you join them.

5. They didn’t talk much about your future prospects at the company

If a hiring manager is really excited about you, they’ll go out of their way to talk about what your future would look like.

They might talk about what the role would evolve into, after you learn the basics.

Or they’ll talk about future paths you could take for advancement, and what other people have gone on to do after taking this role in the company.

(Note: This is also a great question to ask them, if they don’t bring it up).

If none of this happened, it could be a sign the interview went badly.

If you have more interviews coming up and don’t want to take any chances, I’ve created a new guide where you can copy my exact step-by-step method for turning interviews into job offers. You can get more details here.

6. You didn’t feel any type of connection or bonding occurring with the interviewer

Different interviewers have different styles. Some joke around a lot, others are dead-serious.

So don’t just judge this one sign and freak out. But if you noticed some other signs the interview went poorly, and the interviewer also didn’t really bond with you at all… then it’s probably not a good thing, and it could mean the interview didn’t go well or they didn’t see you as a good fit for the company.

However, if the interviewer was quiet and serious, but did take the time to ask you some questions about yourself and get to know you as a person, it might just be their style.

7. They didn’t smile at all, and seemed low-energy

Usually if an interviewer or hiring manager is excited about what you’re saying, they’ll smile a bit, nod their head, and show interest in the answers you’re giving.

So if they seem bored and uninterested, it might be a sign your interview went badly, or your interview answers missed the mark and didn’t show the hiring manager what they wanted.

If that’s the case, they’ll likely choose someone else to hire.

8. The interviewer didn’t ask much about your skills or experience

Usually the first few questions will be designed to judge your motivation and personality.

If you give a bad answer to one of these common, early questions… it could be a deal-breaker! If they’re worried about your motivation, work ethic, honesty, etc… they aren’t going to care about your specific skills and experience.

So after that, they might go light on the experience-based questions because they’ve already made up their mind that you’re not someone they want to hire.

So make sure you practice these common questions!

9. They told you they have concerns

It doesn’t get more obvious than this – sometimes the interview will tell you outright that they have concerns about your experience, or answers you gave.

Don’t panic if this happens mid-interview though. If they told you, it means they’re giving you a chance to explain or provide more info.

10. They spent a lot of time going over and over the same points with you

Let’s say they asked you multiple times about a gap in your work history, or the reason you left a previous job.

That’s usually a sign the interview went badly, or that they had concerns about this specific point and you didn’t put their mind at ease, at least not on the first try.

Of course, it could also be a good sign if they keep asking for more detail about a specific accomplishment or piece of experience you mentioned.

Example: Let’s say you mention that you led a team of 5 in your last job.

Them: “Oh wow, I didn’t see that on your resume. Tell me more about what your role looked like as a leader?”

You: “Well, I managed them on projects, delegated tasks, and conducted all the trainings. The only thing I didn’t do was their performance reviews, hiring and firing.”

Them: “Very interesting. How would you describe your approach when it comes to delegating tasks?”

This type of thing is a positive sign. But when they keep circling back to something while repeating the same question, it’s a bad sign.

11. They kept going through your resume over and over

This is similar to the point above. If they kept looking at your resume and asking you to repeat things, they might have had concerns.

It could also be a sign that the interviewer was new or inexperienced though. So if this happened in an initial interview with HR, or with someone who is lower down in the company’s structure, it might not be a sign that things went badly.

12. They seemed hurried at the end

Did they take their time walking you out or concluding the conversation? Or did they seem hurried to wrap up and have you leave?

Usually if they took their time, it’s a sign the interview went well.

Unfortunately if they rushed you out or seemed focused on their next task (whatever they planned on doing after you left), it’s a sign things probably went badly for part or all of the interview.

13. They didn’t ask for your availability

Did they ask when you could leave your current company?

Now, you won’t always be asked this on a first interview, so don’t panic if you had a quick phone conversation or video interview and they didn’t ask all of this. But usually they’ll ask a little bit about this if you they like you, even in a first interview.

And if they do ask, it’s always a sign the interview went well! Especially if the hiring manager or whomever you’d actually be working for (your future boss) is the one asking.

14. They asked some questions that seemed out-of-place

If they asked anything that seemed odd or wasn’t really related to work, or the job, it could be a bad sign. Examples:

I’m not talking about making small-talk.

But basically, if you did something out of the ordinary and they asked about it, then it might be because it concerned them. It might not ruin your chances at the job, but it’s another sign that the interview might have gone badly.

However, There’s Only One 100%-Reliable Way to Know Your Interview Went Well

… And that’s when the employer calls you or emails you to share feedback.

So what you should be doing after you get home from an interview is:

You could do everything right in the interview and still not get the job. There’s a lot of luck involved in job searching. So counting on one single job offer is dangerous and could set you back weeks if it turns out you get rejected after the interview.

So even though it’s tempting to wait and hope for good news, keep applying for positions and setting up interviews.

What To Do Next:

No matter how you think your interview went, the best thing you can do is keep job searching. Keep applying for jobs.

The biggest mistake I see job seekers make is they get 1 or 2 interviews and stop applying for jobs, and they just hope those first couple of interviews will turn into job offers.

Don’t gamble. Keep applying. It’ll pay off when you get hired for a job much faster and feel much more relaxed while doing it (more opportunities and more interviews means less pressure! You can always cancel a few interviews if you get hired this week, right?)

If you follow these steps, you’ll find a new job faster while feeling much less anxious in your job search.

If you have more interviews coming up and don’t want to leave anything to chance, I’ve created a new guide where you can copy my exact step-by-step method for getting job offers. You can get more details here.

How to Know You Got the Job: 7 Clues

How to Decline a Job Offer (4 Examples)

Quitting A Job Gracefully – How To Resign From a Job

Should You Call the Employer After an Interview? (And When?)

Previous Post How To Answer “What Is Your Leadership Style?” (Interview Question) Next Post Ultimate Job Interview Preparation Checklist