Difference Between Laid Off, Fired, and Terminated (And What To Say) 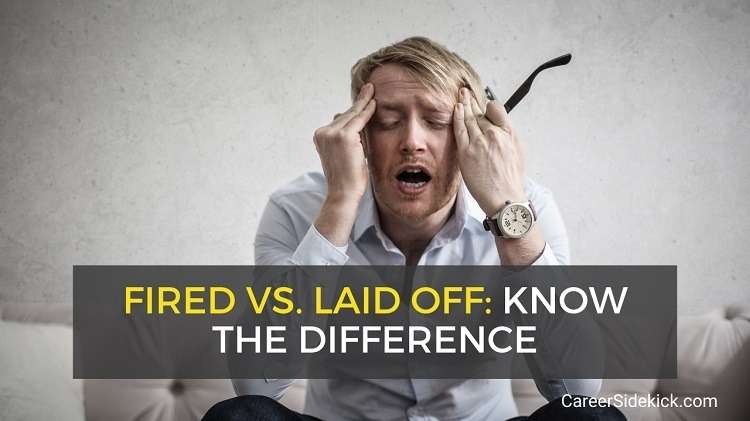 There are some key differences between being fired, terminated, and laid off, and it’s important to know the definitions before deciding what to say to employers.

Why this matters: There are some risks that come with saying you were laid off when you were actually fired for performance or policy violations.

And if you were laid off, you never want to sound like you were fired, so it’s important that you use the right language when telling employers what happened.

So in this article, we’ll look at the definitions of being fired vs. laid off vs. terminated, and what to say when you are fired or laid off to find a new job in less time.

The Difference Between Laid Off vs. Fired vs. Terminated:

Common reasons for being fired include poor performance, violation of company policies, failure to learn the job after being hired, or failure to get along with team members.

You may also hear this referred to as terminated. Most often, terminated means fired.

On the other hand, a layoff is typically something that happens to more than one person at a time and is triggered by company changes, restructuring, acquisitions, financial struggles, pivots in the business model, economic downturn, etc.

So to summarize, the key difference between getting fired/terminated vs. being laid off is:

Getting fired is an event specific to you, and is due to something within your control (work performance, communication, ability to work with the team, ability to learn the job quickly, attitude, etc.)

Whereas when you’re laid off, the position itself is eliminated, and they do not look to replace you. A layoff isn’t caused by anything specific you did.

Example of a layoff:

To help you better understand the difference between a layoff and being fired, here’s an example of a common layoff scenario:

Company A acquires Company B. Both companies provide scheduling software for home cleaners and maid services. Company A wanted Company B for its technology and customer base. However, they already have their own customer support team which is capable of handling all customer service needs.

Because of this, Company B’s support team is likely to be laid off because it was “redundant” after the acquisition.

What to Say When You Get Laid Off

If you were laid off and need to explain this in your job interviews (for example, when they ask, “why did you leave your last position?”) then the best approach is to be clear and direct in your answer and address the fact head-on.

Layoffs are a common part of business in many industries and are nothing to be ashamed of or anxious about sharing.

So you should give a clear, direct phrase explanation like, “I was laid off,” or, “The company went through layoffs and my position was eliminated.”

Avoid using the word “terminated” because it often implies that you were fired and not laid off, which is not what you want employers to think.

Here are a couple more examples of what to say when you’ve been laid off:

Example #1 of what to say when you get laid off:

“I was laid off in June. The company went through a restructuring and our 10-person team was let go. I’m looking for a full-time position now and hoping to find a role where I can continue developing my career as a Project Manager, ideally with a technology-focused company like yours.”

Example #2 of what to say after a layoff:

“My position was eliminated during a restructuring. The company acquired another firm and decided our group was redundant. Seven other people were laid off, too.”

Notice in the sample interview answers above, you’re being clear that you were laid off through no fault of your own!

You don’t want an employer thinking you were fired or let go for performance-related issues if you weren’t. This is why it’s best to mention that others were laid off, too (as long as it’s true).

You can see both of the examples above include this, which eliminates any doubt the hiring manager might have about whether you were fired vs. laid off.

What To Say When You Were Fired

If you were fired, you should be upfront and take responsibility, and then explain what steps you’ve taken to ensure the mistake won’t happen again. However, there are certain things you should never say to an employer (such as, “I had trouble getting along with my boss and we argued frequently”). This will make it sound like you have an ongoing attitude issue.

Why? Because this will SCARE employers and make them not want to hire you.

For more help with what to say after you were fired, read the article below:

3 examples of how to explain being fired

And if you’re wondering whether you should lie and say you were laid off when you weren’t, I’ll discuss that in the next section…

Can You Say You Were Laid Off If You Weren’t?

You could technically tell an employer you were laid off even if you weren’t, however, it comes with major risks and downsides. Doing this would be considered dishonest by most employers, because the word “fired” means something very different than “laid off.”

(These definitions were discussed earlier in the article – see the section titled “Difference Between Being Fired, Laid Off, and Terminated”).

If you decide to say you were laid off when it’s not true, an employer could discover this lie during a background check. Typically, your former employers won’t share much when your future employer calls them… mostly out of fear of lawsuits. But they will often verify the following:

And that last bullet is the key. They’re afraid of lawsuits and will never say, “We fired Frank because he was a poor performer who argued frequently with management.”

However, they may tell your future employer that there were no layoffs and that your employment was terminated for other reasons.

…And that could be enough to cost you the job offer!

So the decision to lie and say you were laid off when you weren’t is up to you! But it is a lie, and there is a big difference between being fired and being laid off, which is why I wrote this article.

FYI, I also do not recommend lying on your resume. (For similar reasons).

Can You Be Laid Off For Poor Performance?

Companies have to make tough decisions during layoffs, and it’s possible that chose to lay off poor performers first. However, even if this is the case, they’re not going to reveal this to you. They’ll simply say that your position is being eliminated and/or you’re being laid off.

So that means you really cannot be laid off for performance. Or if you were, you’re not going to know about it.

Why this matters: If an employer mentioned performance during your final discussion with them, then it likely means you were fired or terminated.

Other signs you were fired and NOT laid off:

In the section above, I discussed whether you can say you were laid off when you were actually fired. And while it’s technically a lie, you can choose to do this.

However, it’s important to know the choice you’re making. You’re not being honest if you tell an employer that you were laid off when you were let go for performance-related issues.

Fired Vs. Laid Off vs. Terminated – Quick Review

If you read everything above, you now know the difference between a layoff and being fired, and you know what to say and how to explain these scenarios to future employers!

It can be shocking, stressful, and scary to lose your job and you may go through a range of emotions after a layoff or termination.

This is normal, and you CAN bounce back, though! There are millions of employers out there and you can find a new position.

Focus on preparing good explanations for what happened, and having a plan for what to say when the interviewer asks about this.

If you do that, you’ll feel more confident and get job offers in more interviews.

What to Do When You Get Fired Unfairly

How to Make Money After Being Laid Off: 11 Ideas

Common Feelings After Being Laid Off

Previous Post How Long to Hear Back After Applying for a Job? Next Post Are Resume Writers Worth It?