Best Answers to “How Would Your Coworkers Describe You?” 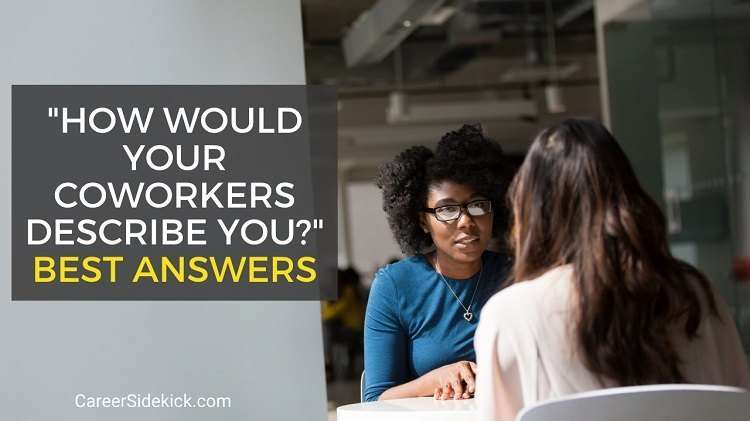 You’re likely to hear any or all of these questions in a job interview, and they can decide whether you get the job:

And there are some specific types of responses that the hiring manager or interviewer is hoping to hear (and not hear).

So to help you feel ready, we’re going to look at the reasons employers ask, and more importantly – what they want to hear.

Then, we’ll look at what a good answer will sound like… with 5 full example answers for different scenarios… so make sure you read until the end.

Why Employers Ask How Your Colleagues, Coworkers or Boss Would Describe You:

Let’s start with why employers ask this type of question in your interview.

First, employers want to get an honest sense of your strengths and weaknesses, and this question usually gets a more honest answer than simply asking, “How would you describe yourself?” or “What can you tell me about yourself?”

Also, they want to make sure you’re honest and self-aware. For example, if you say your boss and colleagues would say you’re cool under pressure and always confident and relaxed, and you’re sitting in the interview looking extremely nervous, then it could cause some doubt in the hiring manager.

So that’s why they ask, “How would your colleagues describe you?” and other related questions.

Steps to Answer “How Would Your Colleagues/Coworkers Describe You?”

1. Be honest when possible

First – be honest and try to give a genuine answer. The interviewer really is trying to learn about who you are as a worker and a person when they ask this question.

And if you give an answer that sounds too fake or scripted, they’re not going to feel comfortable trusting you or hiring you!

Let’s move on to the next steps in how to answer, and then after this, we’ll look at example answers, too.

2. Choose one or two traits to keep your answer simple and easy to deliver

You don’t want your answer to carry on for too long with interview questions like this – so it’s best to pick one or two things to talk about. You’ll do more harm than good by mentioning five different things, and your answer will become scattered and more difficult to deliver impressively!

So pick one or two traits that you feel are true and beneficial – especially traits that will benefit you in THIS employer’s job. That’s the best way to impress them when they ask how your coworkers or friends would describe you.

3. Explain why you chose those traits, ideally with an example

After answering the question head-on, say, “because” and then describe a bit about why those words would be used to describe you.

Is there a key accomplishment from your one or two most recent jobs that you can talk about?

For example, you could say:

“I think my friends and coworkers would both describe me as resourceful and someone who solves problems before I’m asked. In my most recent job, I saved our manufacturing department $25,000 by identifying an electrical issue before it caused any damage, for example.”

4. If possible, show how these traits would help you succeed in their job

This is called “tailoring” your answer. It’s not required, but it’s ideal to talk about something that’ll directly help you in this employer’s job.

So, for example, let’s say the job description mentions that they want a proven leader and someone who can create new procedures for the team, and eventually lead staff directly.

“My colleagues would describe me as a natural leader. I often take the lead on projects and facilitate communication between different groups to make sure we’re all on the same page. This is why, in my last job, my boss put me in charge of coordinating projects between our department and two others.”

The example answers above are about as long as I’d recommend talking. Don’t talk for two or three minutes here.

If in doubt, you can always say, “Did that answer your question, or do you want me to go into more detail?”

That’s much better than just talking for three minutes without pausing, though, because there’s a good chance the hiring manager just wanted a short, simple answer when they asked how coworkers or past bosses would describe you.

How to Answer “What Would Your Boss Say About You?”

If the interviewer asks specifically about what your boss would say about you, then it’s best to choose one positive trait and then back it up with an example.

“My boss would say that I’m attentive and detail oriented. He rarely had to check in on me, and trusted me to operate independently. We caught up once a week, but other than that, I was on my own. I enjoy this type of work environment, and it sounds like you offer a similar environment based on what I read in the job description. Can you tell me more about the environment here?”

If they ask for something NEGATIVE that your boss would say about you:

FYI- it’s possible that they’ll ask, “What’s something that your boss would say about you that’s negative?”

This is similar to questions like “what is your greatest weakness?” or “what areas need improvement?”

When answering, name something that’s not mission-critical to the job you’re interviewing for (otherwise you could lose the job offer!) And – describe what you’re doing to improve on that weakness.

Example answer for something negative your boss would say about you:

“My boss would say that I’m better as an individual contributor than a leader, since I haven’t formally led a team yet in my career, and only did a little bit of project leadership in my last role. It’s something I’m beginning to work on, though. In my last position, I had the opportunity to train two new team members, and both of them became top producers by the end of the year in our department.”

Answers to “How Would Your Friends Describe You?”

Next, if they ask how your friends describe you, it’s best to pick two or three traits, and back at least one of them up with an example.

I recommend you name the most important trait you want to share, give an example, and then name one or two other traits. Don’t worry if this sounds complicated, I’ve included a full example answer below to show you exactly how this will sound in a job interview:

“My friends would describe me as someone who takes initiative and isn’t afraid to make decisions. I’m often the one to make a suggestion or decide on a plan when other people are indecisive. They’d also say that I’m confident and relaxed under pressure. I’m usually the one to stay calm and think through a problem logically, even if things are a bit stressful.”

The Biggest Mistake to Avoid When Answering

Hopefully the tips and examples above gave you a pretty good idea of how to craft your own answer.

To conclude, here are a couple of key mistakes to avoid:

First, don’t say something if it’s completely untrue. You may be tempted to say something that you think the hiring manager wants to hear, like, “I’m friendly and outgoing.” But the truth is – the employer really wants to get to know you. AND, they’re going to see right through it if you’re telling a complete lie.

So be genuine and share positive traits – ideally traits that relate to their job – but don’t pressure yourself to lie or be fake.

Even if a job seems well-suited to the outgoing and loud type of person (for example, sales jobs), they still hire introverts and quiet people! Some of the best salespeople I’ve met in my career are introverted and were great listeners who asked a lot of questions before doing any real “selling”.

Other than this, just make sure you have an answer ready overall. It’s also a mistake to say, “I’m not sure” or “I don’t know.”

So to conclude – practice your answer at home using the samples and guidelines above, and you’ll be ready any time the interviewer asks, “what would your boss/coworkers say about you?” or any of the related questions that we looked at.

It’s not a trick question when they ask, “how would your coworkers describe you?” and it isn’t something to be nervous about. But you do need to prepare ahead of time. Fortunately, you now have the steps to do this!

Previous Post Are Resume Writers Worth It? Next Post What is an IT Job? (Full Guide with Salaries)