How to Answer “How Do You Handle Conflict?” (Interview Question) 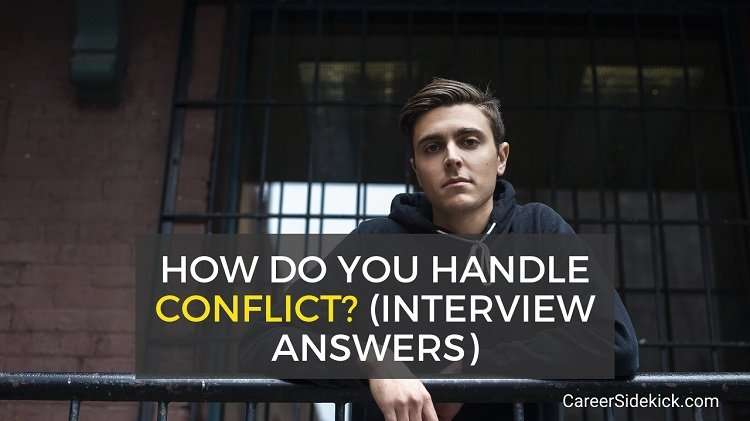 Employers may also ask for a specific example of a time you had a workplace conflict and how you responded (with a question beginning with, “tell me about a time…”)

So I’m going to show you how to answer ALL possible questions about disagreements at work… with word-for-word examples, mistakes to avoid, and more.

There are a couple of key things you should mention if you want to get hired (and a couple of things you NEED to avoid saying), so make sure you read until the end.

Why Employers Ask Questions About Conflicts at Work

Employers ask interview questions about conflict and disagreements at work for a few reasons:

First, they want to make sure you’re able to communicate effectively – with coworkers, with your boss/manager, etc. Good communication can prevent some disagreements, and can almost always stop a disagreement from escalating or becoming a bigger issue.

Next, they want to make sure you stay calm and professional when dealing with conflict at work.

The last thing they want to do is hire someone who’s difficult to work with, hot-headed, and will turn small issues into bigger ones. So that’s why employers want to see that you can communicate well.

They want to see that you leave your ego behind and are willing to compromise and work with others to keep the company running smoothly.

So when they ask this question, they’re evaluating your communication and listening skills, your patience, and your ability to understand the other person’s perspective.

And then, employers want to see you’re capable of finding a resolution or compromise that’s in the company’s best interests (even though it’s not always what you personally wanted).

If they ask for a specific time you had a conflict or disagreement with a coworker, then you need to be ready to share a story. (This is the classic format of most behavioral interview questions, where the interviewer says, “Tell me about a time when..”)

So to prepare, think of one specific disagreement or conflict so that you’re ready for interview questions about the topic.

Try to pick a story where you:

“In my last job, I reached out to a potential new client via email. I didn’t know that one of the other sales associates on the team had already been talking to this person. My coworker was initially upset, but I explained that the system hadn’t shown me that this contact had happened. They had forgotten to log the activity so I had no way of knowing. Once I shared my point of view, they understood that it was an honest mistake. We decided it would be fair to split the commission 50/50 for this new client, so we proposed this idea to our team leader, and she agreed that this was fair. We ended up landing the client and they became one of our biggest clients.”

“When I was new in my last position, one of the senior members of our team showed me a  process to follow. I didn’t follow it as closely as I should have, and my results weren’t great because of it. A month later, he confronted me and asked why I wasn’t following what he had shown me.

From this mistake, I’ve learned to trust my senior team members and use the resources and people around me rather than trying to figure everything out on my own. And I learned that if I don’t understand a process or why it’s important, I can ask a question or two. But if I don’t communicate, nobody can help me. Because of this experience, I communicate better and use the resources around me to be more productive in the workplace.

That coworker ended up being one of my closest colleagues in that last job, and I became one of the top performers on our team that year.”

It’s always good to end your story on a positive note and show how you ended up turning it into a positive. So that’s why that sample answer above concludes by talking about how you became a top performer at the company.

That’s going to eliminate any concern they have that you’ll have similar issues working with them. You never want to name a weakness or challenge that leaves them wondering if you’re just going to struggle in their job, too.

Example Answer for “How Do You Handle Disagreements and Conflict at Work?”

Along with asking for a specific story or example from your past, they may just ask something like, “how do you solve workplace conflicts?”

In this case, you can describe your overall approach to resolving conflict without sharing a specific story.

Here’s a simple way to answer, “how do you handle conflict?”

“When faced with a conflict, I like to ask questions and understand my coworker’s perspective. This helps keep the situation calm, helps them feel like they’re being heard, and after this, I’ve found it’s much easier to come to an agreement or compromise while both staying a lot calmer.”

Note: It’s still okay to share a specific story after this if you want.

To do this, you’d start with the sample answer above, but you’d go on to say, “For example, in my last job…” and then tell them about a time you used the tactics you described to resolve a conflict.

Even though this is a bit more than they asked for, it can help reinforce the point that you’re trying to make. Some hiring managers will appreciate this, and it’s a good way to set yourself apart in your answer.

Top Traits to Show When Answering Questions About Conflict Resolution

No matter how the employer phrases the question in your job interview, there are some key traits they’re always looking for (and some things they definitely DON’T want to hear when asking you how you deal with conflict).

So let’s cover that now…

1. Show them that you stay calm and that you try to understand the other person’s perspective

Disagreements happen; it’s just a normal part of being in a workplace with other people. But the interviewer wants to see that you don’t make the situation worse when it does happen.

You’ll see this in the example answers above – the sample responses we covered are designed to show employers that as soon as you recognize a conflict has occurred, you try to understand the other person’s perspective, act logically and reasonably, and deal with the conflict quickly before it becomes worse.

That brings me to my next key point…

2. Show them that you think logically and don’t take things personally or get too emotional

This is true when answering, “how do you make important decisions?” also. Employers want someone who will act reasonably and look at the information available so they can make the best decision based on logic and reason.

So show them that you use facts and logic to decide what to do. This will make them feel that you’re predictable and won’t act impulsively, which can be dangerous for a company (and can scare them away from hiring you).

3. Show them that you keep the company’s best interests in mind

You can see this in the first example from earlier in the article. The situation was that you and another sales associate were both chasing after the same lead (and trying to earn a commission from “closing” that lead and turning them into a client).

The WORST thing you could say here is that you lost the lead or didn’t end up succeeding in bringing them in as a client because of the internal conflict.

So, you always want to share a story where you kept the company’s best interests in mind and took action to prevent it from becoming a bigger disagreement or problem.

If you prepare a specific story for how you handle conflict AND prepare to talk about your general approach to conflicts, you’ll be ready to give an impressive answer to this type of interview question.

Remember to always show the hiring manager that you are:

…And show that you learned from the experience and used it to improve.

If you use the steps outlined above, you’ll impress the hiring manager and be more likely to get hired in your job interview!