How to Explain Job Hopping in Cover Letters, Interviews and More 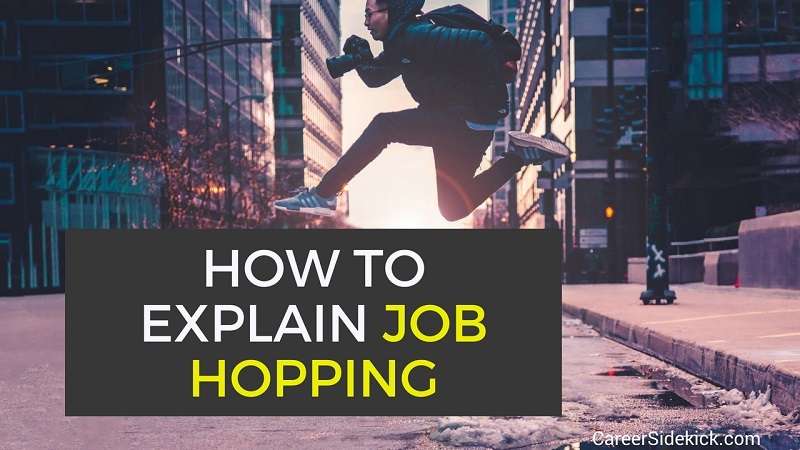 If you’re job searching and looking for how to explain job hopping in cover letters and interviews, you’ve come to the right place.

I’m going to show you everything you need to know about explaining your reasons for changing jobs, so you can get hired even if you’ve job-hopped in the past.

Plus, we’ll look at the pros and cons of job hopping, and the definition of job hopping according to most employers so you can know how often you can safely change jobs.

Different employers see it differently, so you won’t get one exact definition. Let’s look at how most employers define job hopping though…

In general, you’ll be labeled a “job hopper” if you have a pattern of staying in jobs for less than a year. So that’s part of the definition of job hopping.

You’re generally allowed one or two “free passes” in your career, though (depending on how long you’ve been working). Not every job is a good fit, so if you left one job in under a year, it’s usually okay and easy to explain.

(Info on how to explain this to employers is coming up!)

Also, if you’ve been working for a couple of years or more in your career, and you’ve never stayed with a company for more than two years, it can also make you seem like a job hopper – even if you always stay past the one-year milestone.

For example, if you’ve held three jobs since graduating, and have left after 15 months, 19 months, and 12 months, that’s going to bring up some job hopping concerns, even though you stayed a full year at each.

So to recap the definition of job hopping:

Now that you have an idea of the definition of job hopping and how employers decide if they should be concerned, here’s how to explain job hopping to them, in your cover letter and more…

How to Write a Cover Letter Explaining Job Hopping

Okay, so you’re applying for jobs and need to explain job hopping in your cover letter.

If you read the definition of job hopping above, you’ll know if your situation will cause concerns with employers. If so, you’ll want to be upfront and address these concerns in a cover letter.

Steps to explain job hopping in a cover letter:

One of the hardest parts about explaining job hopping in a cover letter is how to bring it up to begin with.

I’d recommend saying something like this: “If you look at my resume, you’ll see a couple of quick transitions between companies…”

And then jump right into the explanations: “I left XYZ Company because ___. I then found a position with ABC Company…”

Good Reasons For Explaining Why You Left an Employer

Now you might be wondering, how do you know if your reason for leaving a job is good when explaining job hopping in a cover letter?

Here are some examples of good ways of explaining job hopping that should satisfy employers:

Those are just a few examples of the many possible reasons you can give. If you want more ideas, here are 20 more reasons for explaining why you left a job.

How to Explain Job Hopping in Interviews

If you did a good job of explaining your reasons for job hopping in your cover letter, you’ll get invited to interview. But how about what to say in job interviews when you’re asked further questions?

First, review the cover letter you sent and get your story straight

You don’t want to say something different or get your stories crossed up in the interview! You need to be 100% consistent here.

And if you interview with multiple people, you need to give the same story. So make sure you know exactly what you sent them in the cover letter BEFORE walking into any interview, whether it’s a first phone interview or a face-to-face meeting.

Next, be upfront and take responsibility

Your goal in the interview is to calmly explain the reasons you mentioned in your cover letter. Provide more detail and explain yourself until they are satisfied (if you’re not sure, you can always say, “did that answer your question, or should I go into more detail?”)

Finally, conclude by showing them why you’re excited about their position

Explain what you’re looking for right now in your job search, and how your research showed that this is a good fit for your skills and for what you want to do next in your career.

If you don’t seem sure of what you want, and if you don’t have a good answer for why you want this job, you will not get hired.

Pros and Cons of Job Hopping

Now that you know how employers define job hopping, and how to explain job hopping, let’s talk about the pros and cons of job hopping. That way, you can make the best decisions for yourself in the future.

In the end, it’s all about balance.

As a recruiter, the lowest-paid people I’ve seen are the people who stayed at one company for 15-20 years.

So that is *not* the solution.

At the same time, I’ve seen people really struggle to get jobs after going through three or four employers in only two or three years.

Once you’re labeled a serial job hopper, it’s very tough to get out of. So it’s about balance – changing jobs a few times but not too often.

Here are all of the pros and cons of job hopping:

If you read this far, you now know how to explain job hopping to employers, plus the pros and cons of job hopping in the future. This will help you get hired faster and feel more confident making decisions down the road.

If you still have concerns or questions about any of this, you can leave a comment below.

Previous Post Previous Work Experience Examples for a Resume Next Post Asking for Feedback After a Job Rejection: Do’s and Don’ts