How to Describe Yourself: Examples for Interviews and Networking 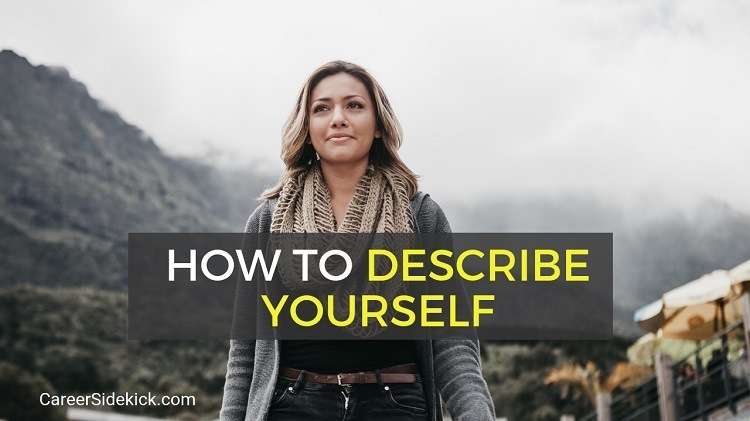 A lot of employers will ask you to describe yourself as one of the first questions in the job interview.

As a former recruiter, I’m going to walk you through the best ways to answer, examples of how to describe yourself, and the common mistakes to avoid.

Then we’ll also look at how to describe yourself in a more casual setting like a networking event or meetup.

How to Answer the Interview Question: “Describe Yourself”

Now, you don’t need to lie and say you’re the most out-going, energetic person in the world, but you’d want to show a bit of both sides, so they at least know you can handle some basic teamwork.

So prepare for your job interview by researching the company and figuring out what type of work environment they seem to have.

This will give you a sense of their overall company culture, which will help you do a better job of describing yourself in a way that’ll be attractive to THEM.

2. Describe traits that fit their job and team

When you describe yourself in the interview, you want to be honest and true to yourself. There’s no need to lie. However, you do want to think about which traits they’ll find most exciting or impressive.

The key is to think about what they’ll view as most relevant.

If the job requires a lot of multi-tasking (you’ll know from the job description most likely), you’ll want to describe yourself as someone who works well with a high number of tasks going on.

If the job seems to be very fast-paced, you could talk about someone who is highly-organized, works well under pressure, and has succeeded in fast-paced environments in the past. (FYI, here’s an entire article on answering, “what type of work environment do you prefer“)

This is how to describe yourself while being honest but also making sure your interview answer will get them excited to hire you.

I personally do NOT work well under pressure. But I’ve still said it in interviews because I knew they wanted to hear it.

And the job didn’t end up being very high-pressure anyway.

If you’re concerned that the job isn’t the right fit, don’t take the job. But your only goal in the interview is to sell yourself and get invited to the next round in the process, and this is how you do that.

This should be obvious, but I want to make sure you know to never mention negatives when answering this interview question.

4. Back up your claims with an example

The fourth and final step when answering, “how would you describe yourself?” is to give an example of how that trait has helped you in a real situation.

We’ll look at many examples of how to describe yourself in the next section, but here’s the basic idea for now…

Imagine you say that you would describe yourself as someone who solves problems and loves thinking outside the box and taking initiative. You might conclude your answer by saying:

For example, in my last job, there was a software failure and more than 40% of our clients were reporting outages. I took the initiative to look at the software error logs and spotted the issue before my Manager had a chance to look. As soon as my Manager became available, I told him I had already found a solution. This saved our clients money and saved my Manager time.

It’s one thing to say, “I take initiative” or something like that, but it’s MUCH more powerful to give a real example of how you took initiative to help your past employer save money or make money.

How to Describe Yourself: Answer Examples

Now that you know the four key steps to use when describing yourself in a job interview, let’s look at some sample short descriptions about yourself.

Remember, research is the first step. Here’s why this is so crucial:

Imagine they ask, “How would you describe yourself?”… and because you did your research… you know that this particular job requires a lot of teamwork and collaboration.

You know from the job posting that this is not a role  where you sit quietly and work by yourself all day.

So in your answer, you’d want to give a short description about yourself that shows you’re collaborative and that you enjoy working as part of a team. Then, you’d give an example of a real-life situation where you demonstrated this.

Hopefully that last piece sounds familiar – it was step #4 above. That’s how you stand out when answering “describe yourself” in your interview.

Here are two examples of how a full answer should sound:

How to Describe Yourself – Example Answer #1:

I would describe myself as someone who is highly-motivated, and I particularly enjoy working as a part of a team. In my last job, I was part of a group of 12 people and we communicated multiple times per day to work as a unit, and I also interacted frequently with other groups like Sales, Customer Service, and more. I enjoy a fast-paced, team-oriented environment like this.

How to Describe Yourself – Example Answer #2:

I’d describe myself as being very resourceful and ambitious at the same time. I find solutions, get creative, and solve problems without needing the help of coworkers or managers. I know when to ask for help and I don’t stay quiet if I do need assistance. But when it is possible to handle something without occupying the time of others, I do it and I consider myself very good at it. It’s one of the things my last boss would say they liked most about me if you asked them to describe my style of work.

How to Describe Yourself With One Word

There’s another similar interview question you should be ready for: “If you only had one word to describe yourself, what would it be?”

Here is a list of one-word answers you can use to describe yourself:

Choose whichever suits you best (and fits with the role you’re interviewing for), and just remember that you can repeat this same word in every interview.

Then, whichever word you pick to describe yourself, prepare an example and a reason for why you chose it. Don’t just say one word and then stop talking. This is a question where they’ll want you to explain your answer.

Here’s a word-for-word example of how to describe yourself if they ask for one specific trait or word:

How to Describe Yourself – Example Answer #3:

The word I’d use to describe myself is ‘ambitious’. One of the reasons I’m looking for tech jobs right now is that I want to work on large, important projects and challenge myself. I like to seek out learning opportunities and I’m not afraid to fail and struggle as a part of learning. I feel the tech industry is the best place to do this right now, and I did some reading on your founder and thought the work culture here sounded like a great fit for my style.

It’s always great if you can end your answer by explaining why you applied for the position and showing them you did your research. Sure, it’s more than they asked, but it’ll impress them.

So keep this in mind in your next interview.

Mistakes to Avoid When Answering, “How Would You Describe Yourself?”

The first mistake to avoid is: Don’t ramble on or be too long-winded in your answer.

Try to keep your answer to around 60-90 seconds. If they ask for one single word to describe yourself, you may want to keep it even shorter than that.

And stay focused on telling a clear, concise story when you describe yourself. Don’t get sidetracked or go off in many different directions with your story.

I’d recommend keeping this simple structure that we talked about above:

Otherwise, you might fall into a common trap that exists for this question, and also questions like “tell me about yourself“. The trap is: They’re trying to see if you can tell a clear story without getting sidetracked and distracted.

If you ramble on for too long, they’ll take it as a sign you can’t keep a clear train of thought and are difficult to communicate with. And that can cost you the job even if they like the actual word(s) you chose to describe yourself.

If you’re not sure whether your answer is getting too long, you can stop and ask for feedback!

Just give your best shot at an answer, and then say, “does that answer your question, or did you want more info?”

That way, you’re not stopping before they’re satisfied, but you’re not talking for an extra two minutes after you’ve answered their question, either.

(Talking for too long after each answer will frustrate the interviewer FAST and is a common mistake that can cause people to fail interviews).

Overall, if you follow the tips above you should pass this question easily and move on to the rest of the interview.

FYI, you should also read this article on how to answer, “tell me about yourself” because it’s another popular question employers ask.

How to Describe Yourself in Networking Opportunities and Events

We’ve covered how to answer “describe yourself” in job interviews, but what about networking events? Describing yourself in a non-interview environment is a bit different. To start, you should read this article on how to develop a great elevator pitch.

Part of it is about job interviews, but it also includes scripts for networking and more.

When you’re describing yourself in a meetup or networking event, the steps we looked at to begin this article are still good steps to follow.

You should try to research the people you’re meeting, or at least think about your audience before answering. (Even if you just met them – think about what type of background they have, what might interest them, etc.)

Then when you describe yourself, talk about the pieces of your background that they’ll be able to relate to, or that they’ll find relevant.

This is how to capture someone’s attention when first speaking with them. Then you might find some common ground or common interests, and you’ll both enjoy the conversation a lot more.

If you follow the four basic steps at the beginning of this article, you’ll be able to describe yourself confidently to anyone you meet in a professional setting, whether it’s a job interview or not.

Walk Me Through Your Resume: Answer Examples

“What Can You Bring to the Company?” Best Answers

How to Answer “Why Are You Looking for a New Job?” (6 Examples)

Previous Post Body Language Tips: How to Impress Anyone Quickly and Easily Next Post “What Type Of Work Environment Do You Prefer?” Interview Answers