Should You Accept a Counter Offer?

If you’re wondering, “Should I accept a counter offer?” then you’re in the right place.

In the next few minutes, I’m going to show you the pros and cons (and the hidden dangers) of accepting a counter offer.

We’ll look at 4 reasons why you might not want to accept that counter offer, a few situations you might, and then how to accept a counter offer if you do decide it’s the right move. (These situations are RARE, though, so keep reading).

Should You Accept a Counter Offer?

As a recruiter, I recommend not accepting a counter offer. Your relationship with the employer will change since they know you were looking to leave. Their counter offer is often a short-term solution for them to keep you there for a few months, but they won’t value you in the same way as a long-term employee. They’re simply afraid to lose you in the short-term because it’ll be an inconvenience.

For this reason, you should not accept a counter offer and instead, you should accept the offer from your new prospective employer. Plus, you must have had reasons for wanting to leave this current employer, since you went out and got another offer in the first place.

You might have heard the advice, “don’t accept a counter offer,” and there are some good reasons for it. After spending most of my career as a recruiter and talking to plenty of people who regret accepting a counter offer, I want to show you 4 reasons why you shouldn’t accept.

1. There are usually other reasons you wanted to leave aside from salary

Chances are if you were job searching, there were probably some things you wanted to get away from in your current job. Most people don’t take or leave jobs just for salary.

So while it’s tempting to accept that counter offer for the immediate boost in pay, you’re going to be right back in the situation that you were trying to get out of.

After a few weeks back on the job, you’ll start to remember all the little things that were driving you crazy and prompted you to job search in the first place, and now you’re STUCK.

2. Your relationship with your employer will change (for the worse)

When you give a two week notice or resign from a job, your boss is only thinking about the short term. They need the work you’re doing. It takes time and effort to replace you, and the team is going to suffer during that period.

So they’re in panic mode, thinking about the short-term situation. And because of that, they’ll do pretty much anything to keep you there!

They’re not thinking about the long-term, though, and they won’t care as much about your future with the company after you’ve shown them you were about to leave.

So while you might get a boost in pay in the short-term by accepting that counter-offer, the situation could change quickly after that. They’re not going to simply forget everything.

The fact they’re now trying to cover their needs in the short-term doesn’t mean they’ll value you or treat you well over the next 6-12 months and beyond.

You aren’t likely to get promotions in the future, for example, because they’ll be concerned you’ll look to leave again.

As mentioned above – the company is really focused on the short term when you resign… the “here and now”.

After they get you to accept the counter offer, though, they’re able to relax and operate more logically. And at that point, they may even set in place a plan to replace you that year.

They know you were trying to leave, and they might be thinking, “Well, how do we know they won’t just do it again?”

Sometimes this is enough to justify replacing you. The difference is, they’ll do it on their terms and make sure they have someone else ready to fill in and take your role immediately, so they won’t feel the “pain” of losing you.

That’s why they’re so eager to make a counter-offer, but not eager to keep you happy (or even employed) after that! 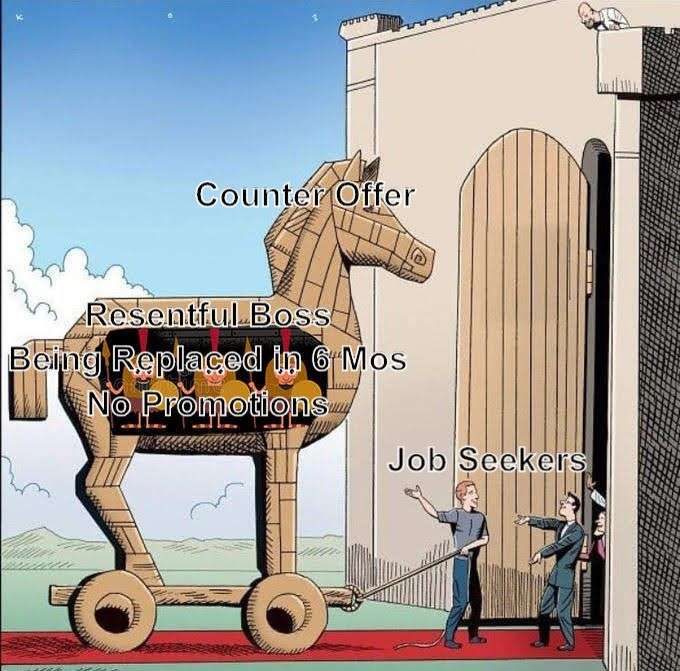 Finally, going all the way through the interview process with another company and then using that to get a higher offer from your current company is going to burn bridges.

That other employer is not going to be happy.

And while you might be thinking, “It’s just one employer; what’s the big deal?” people change jobs a LOT in most industries these days. So the hiring manager, recruiter(s) and HR team involved in the process may end up splitting up and going to multiple companies in your industry. And they’re not going to forget something like this.

So if you accept a counter offer, just make sure you’re willing to burn those bridges, because it’s likely to happen.

These are all reasons why most people should not accept a counter offer. If any of these risks concern you, then take the new position and don’t accept the counter offer!

If you’re still not convinced or still wondering if you should accept a counter offer in your specific situation, keep reading. In the next section, I’ll cover some situations where accepting a counter offer might make sense.

Should You Tell Your New Employer About a Counter Offer?

The only exception is if you plan to accept the counter offer, which is very rarely a good idea. However, I’ll share a few scenarios below where it does make sense to accept a counter offer.

When to Accept a Counter Offer (Rare Cases)

Maybe you asked for a raise but were told they didn’t have it in their budget. Then you went out and got a job offer and told the company that you were leaving. Then maybe the company said that they’ve found room in their budget and would like you to stay.

This still carries some of the risks mentioned above, when we discussed why not to accept a counter offer. And you still can’t be sure that the employer is being truthful and really wants you long-term (we discussed earlier how companies will say anything to keep you short-term until they can replace you, since you’re leaving a gap in their team by resigning).

But if you believe in the company and feel good about your long-term future there, then it might make sense to take the counter-offer.

I’d still argue that it’s risky, though, and what’s to say they won’t have more budget issues in the future? I’d still take the new job rather than the counter offer in this case, but it’s debatable.

There really aren’t too many other scenarios where it makes sense to accept a counter offer. I strongly advise against it usually.

Even if the employer offers you a promotion or boost in job title, this is likely to be a short-term ploy to keep the team fully staffed. It doesn’t guarantee they’ll treat you well or even let you stay with them long-term! They could still look to replace you quickly after you accept.

Conclusion: Most Job Seekers Should Not Accept a Counter Offer

So we’ve looked at the potential risks now. It’s time to wrap up with a conclusion.

Every time a friend asks me, “should I accept a counter offer,” I tell them “no” because of this.

I’ve had friends and colleagues go accept the counter offer anyway. Some got away with it. But some regretted it almost instantly for the reasons mentioned earlier in the article.

So when you’re faced with a tempting counter offer, try to remember why you began job searching in the first place and all the exciting things you learned about that new job.

On average, you’ll be better off finishing what you started and accepting that offer from the new employer!

Also, I’d never recommend going out and getting job offers just to use as leverage to get a raise in your current job. There are much better ways to ask for a raise at work.

You now know the pros and cons of accepting a counter offer, and why most people should not accept one. It’s up to you to make your own decision based on your situation. If you’re still unsure, trust your gut, or ask yourself which choice you’re most likely to regret in the future. Do whatever you feel you won’t regret.