The Best Time to Interview (and When to Avoid) 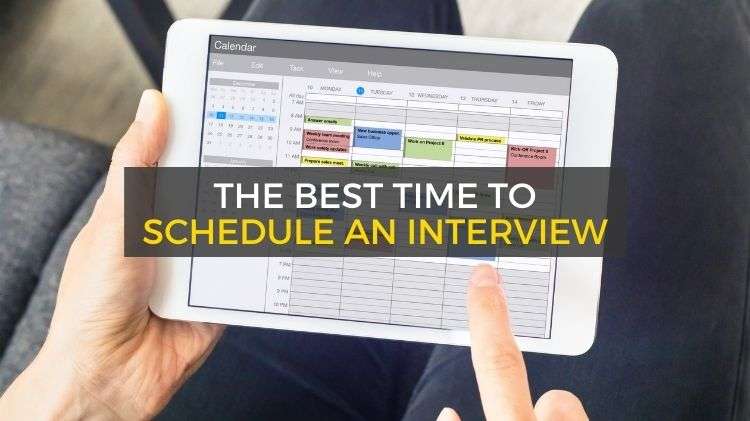 If you’re wondering when the best time to schedule a job interview is, this article is for you.

The Best Time to Schedule an Interview

Hiring managers tend to address important tasks in the early morning and may not have time for job candidates.

So if you interview early in the morning, you may be left waiting or even have to reschedule if something unexpected lands on the hiring manager’s desk.

You should aim to avoid interviewing first thing in the morning for this reason.

Whereas, by mid-morning, the hiring manager is more likely to have handled any unexpected or last-minute/overnight issues that came up, and will be ready to attend their regularly-scheduled meetings, including your interview.

Similarly, if your interview is the last thing on a hiring manager’s schedule for the day, you run the risk that they’ll need to leave early or decide to postpone the interview.

This is a minor/slight difference but could still be a factor. Whereas, if you schedule interviews for mid-morning or early afternoon, hiring managers will be 100% work-focused and in the mood to talk about the job.

This is why it’s best to schedule your interview for the middle of the day: late morning or early-to-mid afternoon.

That’s the optimal interview arrangement if your job search schedule allows for it.

If you’re interviewing when you already have a job, it’s acceptable to ask for an early morning interview, or an interview at the end of the workday, such as 5 p.m.

Companies will often adjust their interview process to accommodate you if they know you’re currently employed and if they’re excited about you as a candidate.

Or, you can ask the employer if they can condense their interview process so that you can take a single day off from work and meet with multiple people. As long as you ask for this a few days or a week ahead, many companies can accommodate.

The Best Days to Schedule an Interview

The best days to schedule your interview are Tuesday, Wednesday, and Thursday. The middle of the week is the optimal time to interview since your interviewers will be more engaged and entirely focused on their work.

For many HR professionals, Monday is spent working out plans for the coming week, catching up on emails, and attending to other pending work from over the weekend.

Monday mornings are especially busy and hectic in the world of HR and recruitment.

For this reason, Monday is not an optimal time to interview.

Scheduling an interview mid-week is your best bet.

Also, avoid Friday in the late afternoon, if possible, since employees tend to be less focused and less engaged in their work compared to the middle of the week.

If you have to take a Friday interview, it’s not the end of the world; just interview earlier in the day, such as in the morning or early afternoon. That way, you’re more likely to have a deeper conversation and find your interviewers to be more engaged listeners.

Don’t Overthink the Scheduling of Your Interviews

There’s no single “perfect” time to schedule an interview, and accepting an interview outside of the times listed above won’t necessarily cost you the job.

Don’t panic or assume your interview is going to go poorly simply because of the time it’s scheduled.

And if an employer only has job interviews available in the early morning, late afternoon, etc., take it!

Don’t wait weeks for the “perfect” interview slot if the employer can schedule you much sooner at a different time.

Don’t overthink the interview time. The goal is to get to the job interview and impress the employer. That’s it.

You may also have individual preferences to consider, such as whether you’re a morning person or night person.

And if you’re attending the first interview with a recruiter or an HR person, the timing becomes less important because more of their job revolves around conducting interviews.

A recruiter should be able to attend an interview early, late, or midday.

I recommend following the suggestions above if you can, and scheduling interviews toward the middle of the day, but don’t worry if your situation or the company’s situation requires different interview scheduling.

Is it Better to Interview First or Last?

It’s better to interview last rather than first. Employers interview many candidates for each role, and so it’s best to be later in the process, after the hiring manager has met with a few candidates.

As a recruiter, I’ve seen a candidate perform well in an interview, but because they were one of the first candidates, the hiring manager still wanted to talk to other job applicants.

That’s the risk you run if you interview first.

And if you’re one of the last candidates, the conversation may be fresher in the hiring manager’s mind when they go to make a decision.

Interviewers try to remember each candidate equally, but they’re only human. Some interviewers will remember slightly more about a potential employee who was interviewed last.

However, don’t overthink this, especially since you often won’t even know how many other candidates have had an interview, or when the interviewer conducts their interviews.

The interview time/order is a minor factor overall, and these general “rules” aren’t even true in all companies.

For example, some hiring managers may speak to a great candidate and cancel the rest of the interviews because they want to hire this person.

If you were the final candidate they had scheduled to interview, perhaps next week, then you could miss out on the role!

So don’t overthink this when considering the best time to interview. And don’t ever delay your interviews solely to try to be the last candidate. That’s an awful idea that will not pay off in your job search.

Focus on picking optimal times for your professional schedule, and times when you’re most alert and effective at communicating.

Go into each interview with a focus on showing them that you can help them by performing well in the role, and building relationships with the team. Do this and you’ll get job offers no matter when you schedule your interviews.

Job candidates should also avoid scheduling interviews immediately before or after other commitments.

Interviewing can be stressful, and you’ll be even more stressed if you’re worried about another appointment running over its allotted time, or being late to your next scheduled meeting.

So pick a time slot that provides you ample time to arrive a bit early and to decompress after the interview (or stay late if the employer asks if you can stay and meet additional people… which is always a sign that your interview is going well).

The best time to interview is late morning or early afternoon, when the interviewer has finished their morning routines, is focused entirely on work, and is not about to leave the office in the late afternoon.

The best days of the week to interview are the middle of the week: Tuesday, Wednesday, and Thursday.

Remember to use the advice above as a general guideline, though, and also choose interview times that fit your preferences and life.

If you’re a night owl, don’t schedule an interview at 9 a.m. and fight through rush hour just to arrive tired and stressed.

Choosing an optimal time is not as important as preparing well for your interview, knowing details about the job and company, and asking unique questions to show interest in the position and company.

Don’t spend too much time obsessing over scheduling an interview, and don’t give yourself decision fatigue by overanalyzing the recommendations above.

There are better areas to focus on in your job search.

If you do your best to schedule interviews at times that work well for you and get to the interview relatively soon after being invited (days, not weeks, ideally) then you’ve succeeded in optimally scheduling an interview.

Steps in the Interview Process: What to Expect

How to Prepare for a Remote Job Interview: 10 Tips

Can You Bring Notes to a Job Interview?

Previous Post How Do You Build Relationships? Interview Question Next Post The 3 Best Colors for a Resume