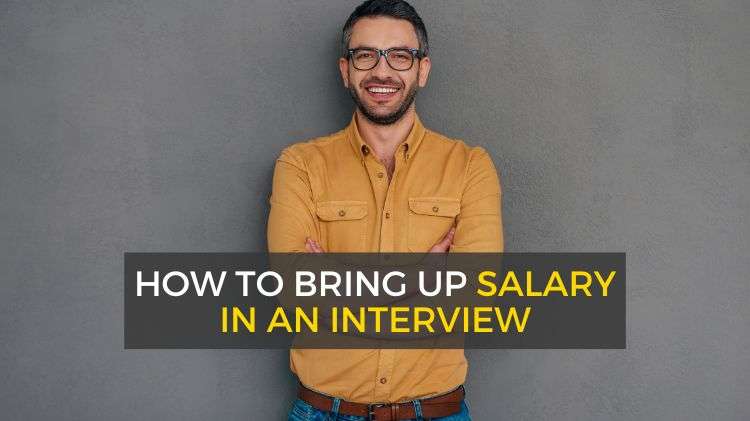 If you’re planning on asking about salary in a job interview, this guide is for you.

There’s a right and wrong way to ask, and your timing matters, too. Asking incorrectly can derail your interview and cost you job offers.

As a former recruiter, I’m going to share how and when to bring up the topic of salary in your interviews to find out the pay range without losing any opportunities.

Can You Ask About Salary in a Job Interview?

You can ask about salary in any interview, but you should also show the employer that you are focused on other factors, such as whether the job is a good fit for you, and how you would contribute.

You can do this by asking great questions about the role, team, and company, and by showing enthusiasm when an aspect of the role or company sounds interesting.

Then, when you get around to asking your salary question, the hiring manager will see that compensation is just one of many factors you’re evaluating.

That is how to ask about a company’s compensation package without ever costing yourself the job offer.

Also, remember, the fact that you can bring up salary in a job interview doesn’t mean that you must. It’s perfectly acceptable to wait for the employer to bring up the topic of salary during later salary negotiations if you’re more comfortable doing so.

At that point, they’ll discuss the entire compensation package with you.

How to Ask About Salary in an Interview: Phrasing and Words to Use

When you ask about a company’s salary range, be tactful and use phrases such as “expected compensation range” or “range you’ve budgeted for the position” rather than words like “pay” or “money.”

I’ll share examples of this below, so don’t worry if you’re still not sure exactly what to say.

Asking Salary in an Interview: Examples

There are a couple of ways that you can ask about salary in the interview. One method I’ve had a lot of success with is to offer a bit of information first, and then ask about the company’s salary range in return.

What information should you offer? One approach is to share your current/recent salary.

I’ll share examples of this below, and then we’ll talk about another method you can use.

“The role sounds fantastic so far. I did want to make sure we’re on the same page in terms of compensation. In my current role, I’m earning a base salary of $X with a bonus of $Y. I’d be hoping for an increase if I make a move right now. Does that fit with the range you’ve budgeted for the position?”

“In terms of compensation, my last role paid me $X with a bonus of $Y. I’d be hoping for an increase in my next position, as I continue to advance my career. Does this fit within the range you’ve budgeted for the position?”

As mentioned earlier, these examples are best if you’ve been well-paid in the past.

Companies will be hesitant to offer you more than a 20% increase on your most recent salary. So if you were underpaid and want drastically more, keep reading for a simpler approach!

The scripts above are also best if you’re seeing a lot of interest from employers in your job hunt.

I used one of the exact scripts above when I was currently employed and taking a phone interview on my lunch break. I had no time to waste, and wanted to take control of the conversation and get the info I needed. There’s nothing wrong with this.

However, if you don’t want to share your current salary with employers, here is another way to bring up the topic of salary in the interview:

As you’re concluding the conversation with this prospective employer, tell them that you’re excited about the role but would also like to understand a bit about what type of compensation package they are offering.

Here’s how it would sound:

Example 3 (Asking the Salary Without Sharing Your Recent Pay):

“The responsibilities and role sound great so far. I think the work would align well with what I’ve been doing in my two most recent roles, especially the client management aspects. Can you tell me a bit about the compensation range for the position?”

That’s a direct, clear way of asking about salary toward the end of an interview (including a first interview).

At the same time, you’re remaining polite and explaining why you’re curious — because the role sounds great to you, and you’d like to see if the pay fits your salary requirements.

The key is to use this script at the end of your interview. That’s when to ask about salary if you’re not going to volunteer any information of your own (such as your recent pay).

Before your interview, you can look at the job description, find the exact job title, and then go to an online salary tool like those offered by Glassdoor.com or Salary.com to look up the average salary range for that job title in your city.

This gives you an additional way to ask about the position’s salary range.

Now, instead of sharing your past salary as we did in Examples 1 and 2 above, you can simply share the market and salary trends you’ve observed and then ask if this employer’s salary range matches those numbers.

Here is how this would sound:

“The role sounds great so far. I do want to just make sure we’re on the same page in terms of compensation, at least in broad terms. I compared the data from a few online salary calculators, and it seems that the average base compensation for this position here in Boston falls between $50,000 and $70,000. Does that fit the range you’ve budgeted for this role?”

What if the Employer Says “We Don’t Have a Salary Range for the Position?”

Note: In my experience as a recruiter, every role will have an expected salary range. The hiring manager knows this info.

So if the hiring manager says that they have absolutely no idea about expected compensation, they’re holding back some information.

If a recruiter or HR person says that they don’t know, then it’s remotely possible that the hiring manager just didn’t tell them yet. But that’s unlikely, too.

Either way, if a hiring manager says, “We haven’t set a salary range for this position,” you can decide whether to push the topic further or not.

I recommend not being overly aggressive in a first interview, or if you have not yet attended a face-to-face interview.

Occasionally, an employer will also be able to stretch their budget if they really like a candidate after a few rounds of interviews.

So don’t panic if you hear an initial number/range that’s a bit low when discussing salary in the job interview. It’s often worth continuing if the role itself is attractive.

When to Ask About Salary in the Interview

The scripts above can be used at any time throughout the interview process, but as a general rule of thumb, the more interest you’re seeing from employers in your job hunt, the sooner you can ask about salary in your interviews.

If you’re only getting a couple of interviews in your job search (or fewer), then I recommend waiting to ask about salary until a second interview at the earliest. It’s slightly more customary and less risky.

In this case, the biggest risk you want to avoid is upsetting an interviewer/hiring manager by asking the compensation at a time they feel is “wrong”.

So attend some interviews and learn about what various companies can offer. Once you’ve got the interviewer’s interest in the second round, ask about compensation.

However, if you have six employers waiting to talk to you each week, it makes sense that you’d want to quickly determine the salary of each new job.

So candidates in this type of situation often state their salary expectations early on and ask clearly if a position’s compensation fits their needs.

They may even ask about the salary before an interview.

More likely, they’ll use a script like those in Examples 1 and 2 to ask in the first interview.

These job candidates do NOT want to start to negotiate salary after going through four interviews just to discover that the company can’t pay enough.

Every hiring process and company is a bit different, too. So if in doubt, trust your gut about when to bring up compensation in the interview.

If it doesn’t feel right to ask about salary in a first interview, wait.

One hiring manager might not mind you asking a salary question in the first meeting, but another may react poorly.

It’s all about evaluating what’s important to you (your time, versus ensuring you maintain great rapport with this potential employer).

There’s quite little risk if you discuss salary with the scripts above, but you also don’t need to risk anything if you don’t feel like it! You can let the first interview pass and ask about salary in an upcoming interview.

The employer will bring it up eventually, too.

Unfortunately, many employers wait far longer than most job seekers would like before they start discussing pay.

Conclusion: How to Bring Up Salary in the Job Interview

There’s nothing wrong with asking about salary during an interview process. Job seekers have a right to protect their time and find out whether a position can pay enough to meet their salary expectations.

However, you need to ask tactfully and show employers that salary is just one of many factors you’re looking at.

Ideally, ask one or two other questions first… about the position, the team, etc.

Be tactful in your wording, choose a time to ask that’s comfortable for you and fits the flow of the conversation, and you’ll find out the info you need without hurting your interview performance.

There’s no shame in asking what a position pays. We all go to work for the money!

Steps in the Interview Process: What to Expect

Previous Post How Often do People Change Jobs? (And Why?) Next Post What to Do When You Get Fired Unfairly