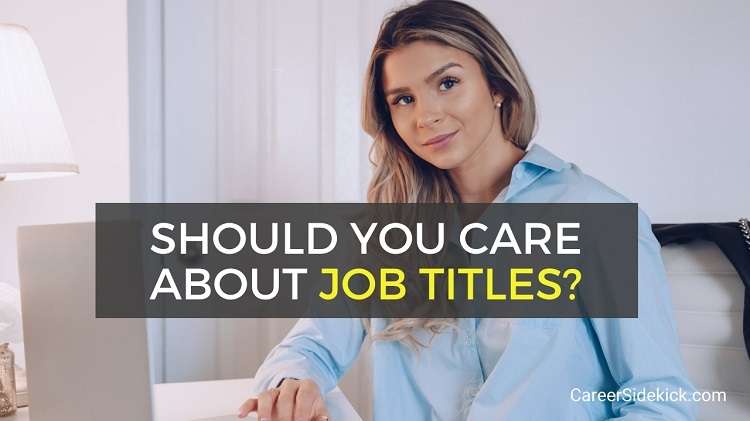 Are job titles important? The answer might surprise you.

The perception of job titles is that they’re extremely important. I’ve seen people get their dream job offer in terms of salary, but they were unhappy because the title wasn’t what they wanted.

A job title doesn’t put food on the table though, does it? That’s why if you’re job searching or negotiating for a new role, there are 2 things that are MUCH more important than job title.

I’ll explain everything in the information below. We’ll also talk about why job titles are still somewhat important… just not nearly as important as most people think.

Why Are Job Titles Important?

Job titles are important because they allow members of your organization to know the type of work you do and the level of experience you have. They also allow people from other organizations to better understand what your role involves, whether you’re talking to a recruiter, a hiring manager, or someone else.

However, how important are job titles? They’re not nearly as important as you may think.

Why Job Titles Aren’t as Important as You Think

The truth about the importance of job titles is: The power of a job title is greatly overblown.

As a former recruiter, I’ve seen a lot of people get completely caught up with the job title in their job search. They were a Manager, so now they want to be Senior Manager. Or they want to have the word “consultant” in their title, because that’s what they had in their last job.

The reality is – the work you’re doing and the pay you’re receiving matters much more.

A job title doesn’t put food on the table or put money in your bank account.

And if a company gives you an odd-sounding job title, you can easily put a more fitting title on your resume and LinkedIn profile.

For example, if a company hires you as a “Customer Happiness Specialist” and you want future employers to know what you do, you could list it like this on your LinkedIn and resume:

Now you’re showing what you do AND adding a great keyword (“customer service representative”) to get found more on LinkedIn, and to get past automated job application systems with your resume.

Which job should you take? The $100,000 job with the “worse” title, because title isn’t nearly as important as pay.

That $100,000 job is likely to be more advanced and more challenging.

And if you have any concern about communicating to future employers what level you were at, just mention the pay!

Imagine a year down the road, the interviewer asks, “Why do you feel you’re ready for the Senior Director role you applied for? I see you’ve been at the Manager level for the past year.”

“Great question. I’ve found that my current employer has job titles that aren’t as inflated as the overall market, however, my role here is equivalent to a Director role in most other firms. When I took this role, the starting pay was $100,000, while I saw some Director jobs paying $80,000-$90,000 in this same industry. My responsibilities are also on-par with Directors in other firms. I’ve been managing a team of 12, including hiring, firing, and performance reviews.”

At the beginning of this article, I mentioned there are two key factors that are more important to get than job title… whether you’re negotiating to improve things in your current job, or looking for your next job.

As mentioned earlier, base salary is what pays your mortgage, pays off debt, puts food on your table and builds your bank account. Not job title.

And often, base salary is how you can prove to your next employer that you deserve a high salary from them, too. (If you were well-paid in the past, you’ll have more leverage to negotiate with when they ask, “what is your desired salary?”)

While other forms of pay – like bonuses and stock options – are also more important than title, you should focus on negotiating base salary first.

The actual work you’re doing in your role is also far more important than job title.

It’s what’s going to show on your resume and LinkedIn, what you’ll discuss with future employers in your interview, and how you can really command higher pay throughout your career.

Getting a job with an inflated title like Director is useless if you’re not managing any people and not doing any Director-type work. The next employer will see right through it.

Whereas, taking a job with a “lower” title like Manager, but leading six people, hiring staff, conducting trainings, etc., will show future employers that you are at a high level of experience.

Conclusion: The Power and Perception of Job Titles are Overblown

The bottom line is: Job titles vary and are never the first thing you should focus on in a job hunt.

I assume the second option is more appealing since it actually puts more money in your pocket! And if that’s the case, then a job title isn’t as powerful as you’ve been led to believe.

Are job titles important? Sure. But they’re not as important as the two factors we discussed earlier in this article – salary and job responsibilities.

Let your colleagues and coworkers worry about job titles while you focus on the things that really matter: Pay, responsibilities, learning new skills, building your resume with achievements, etc. That’s what will grow your career and income in the long run!

Recruiters and future employers will see through an inflated job title in two seconds. Your future career opportunities will be based on your skills and accomplishments.

So choose a challenging, high-paying role rather than a role with an impressive job title.

Is Career Coaching Worth It? 7 Benefits

Previous Post Should You Accept a Counter Offer? Next Post How to Use LinkedIn to Find a Job in 2022